I was out and about enjoying a couple of hours hiking at Henry Cowell Park, which is a state park near Santa Cruz, California, when I ran across (fortunately not literally) an elusive lesser brown dragon!* 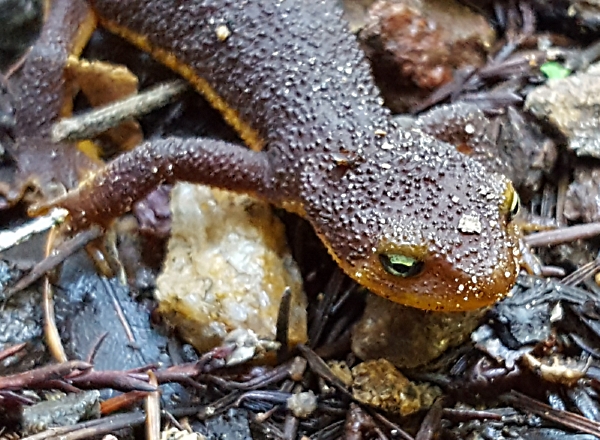 My job involves a split shift where I’m at loose ends for a couple of hours in the middle of the day, so I have been filling my time with hiking, running, and working out.  One unanticipated side effect of this is I’ve been seeing all sorts of sights I think are worth taking pictures of and collecting here.  I figure that since I want to post at least somewhat regularly on my blog and I’m not painting as much these days, then I need to expand my horizons a bit … so enter the dragon, as it were. 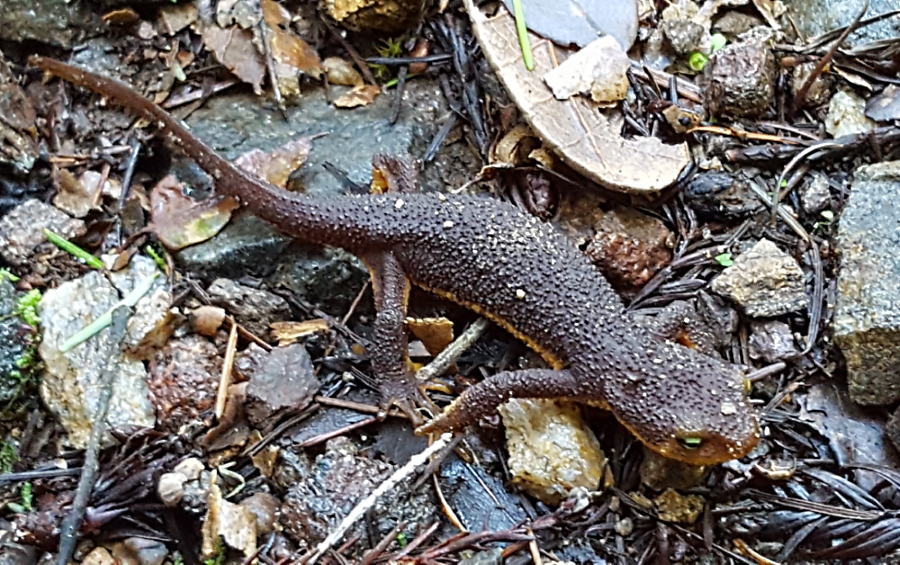 Beware a dragon on the move!

Our newt, as you can see, blends in pretty well with the detritus of the trail.  I only saw him/her/it because she was legging it pretty hard and the movement caught my eye.  Thank goodness because I would not have been happy at all to accidentally step on such an adorable little creature!**

The beastie made it to the other side of the trail and I think she’d thoroughly had enough of the strange, probably hideously smelly giant taking pictures of her, and appeared to look for a convenient rock or branch to hide under.  I took this as my hint and decided to leave the lesser brown dragon alone and get back to my hike.

I did play another game of Blood Bowl last night too (busy day) and will post about that soon.  I’m going to work a little on painting today too.  It is pretty nice outside for February, so I might try and prime a couple of Nurgle linemen/rotters.  I also have a couple of pretty sexy pictures of various banana slugs I encountered further along on the Rincon Trail.  So all in all lots to talk about these days.

* My husband did a little poking around online after I mentioned to him that I had done so without success and said that he thought our draconic friend was a rough-skinned newt.  What stood out most to me was reading that the dragon could release a “strong toxin” from its skin, etc. etc.  I’m glad my only designs on our friend were photographic!

** The encounter give me the germ of an idea about a giant who doesn’t want to step on things, which are quite large to us but small to her.  Not sure where to go with that yet but time will tell.

27 thoughts on “Enter the Dragon”