The last time I played Blood Bowl was in the late 1980’s during my college years.  A friend’s boyfriend owned the game (it had cardboard guys instead of miniatures) and he wanted to start a league so we played.  It was fun but summer came and everyone spiraled off onto other paths and I never saw any of them again.  Not unusual for college with life organized into semesters and staying in touch with social media not being what it is today.

Fast forward to now, and a friend wanted to start a league.  Sound familiar?  I said yes and we had our first game at his dining room table.  There were three games going on at once, ardent spirits flowed freely, and it felt a bit like gaming at a convention in that you had to yell to talk to your opponent.  It was great fun.

I thought the cheerleader and dwarf referee were a nice touch.

I wish I had thought to take some pictures, but I didn’t.  Fortunately though, I did get in another game a couple of days later with the same opponent, who had two painted teams, and was kind enough to invite me to his house.  My hosts also kindly shared their lovely meal of chicken and asparagus too, which I greatly enjoyed.  He played the Orks and I played the Humans.

I had one special character, the big guy in front to the left with no helmet.  He was slow but extremely strong and good at hitting people.  Not a bad guy to have in a scrum as it turned out.  The other special character, the guy with the winged helmet standing next to my Big Bruiser Guy, is included in the photo but I didn’t have him on my team.  I’ll probably try him the next time we play. 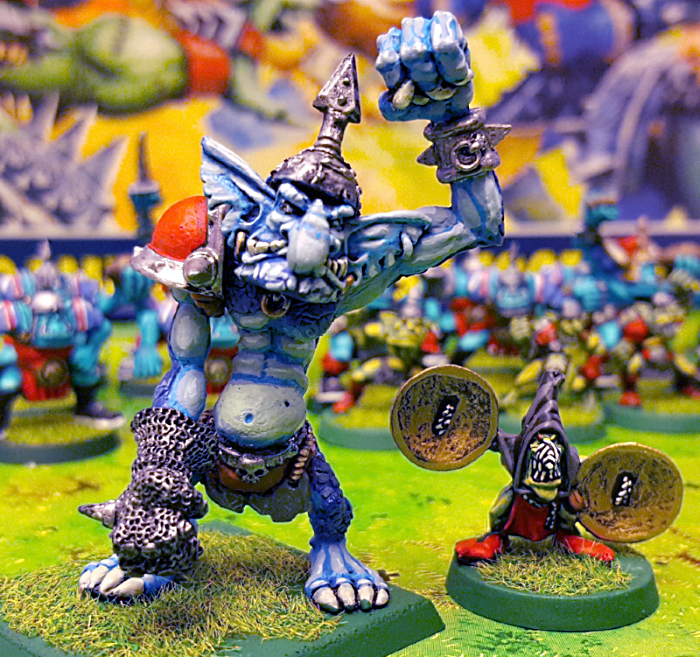 As it turned out that was the Stupidest Troll Ever!

It was a good thing that trolls can regenerate because our blue friend fell into a bunch of pieces, the victim no doubt of one hundred year old super glue bonds.  Fortunately we got him put back together in time for kick off.  Unfortunately he turned out to be the Stupidest Troll Ever, which is saying something considering that you have to roll a 4+ on a D6 each turn to get your troll to do anything other than just stand there.

Apparently if you have some of your own guys standing next to your troll, you can get a positive modifier on the Hopefully He Won’t Just Stand There and Do Nothing roll, which can be helpful.  For our game we didn’t realize this.  I think he might have done something in one or two of the eight turns we played.  We’ll remember our error next time for sure.  Also, I am told that you can hire trolls on your team that aren’t paralyzingly stupid, but where is the fun in that?

My take away with playing mostly the basic game so far with only a few of the special rules is that it is fun enough that I want to paint a team or two.  I decided upon the Nurgle team and bought the team box.  I based my decision completely on the fact that I like painting Nurgle, though now that I’ve delved a bit more into the game I think I’d enjoy a team with more of a passing game.  Still, it’ll be fun modeling the guys and I like that one only needs a handful of models for a complete team versus building an army in larger games.

For next time I hope to have another poxwalker done.  I haven’t been playing much 40K for awhile now, but I do want to get the unit finished.  I think they’d be fine in Blood Bowl if you overlook the fact that most of them are packing knives, broken rifles, wrenches with spikes tied to them, and the like.  I’m not too worried about it considering that goblins can bring chainsaws, giant spiked ball-and-chain weapons, and throw bombs at the opposition, and the less said about the Forge World drunken dwarf on a zamboni-looking thing the better!