Let the plague bells ring!  Friends, I have at long last closed the books on my mob of twenty Dark Imperium poxwalkers with this round-up.  I started putting the wretches together in June 2017, when the boxed set came out, and now we come full circle to June 2020.  What a long, disease-ridden road (punctuated with both apathy and frenzied activity) it has been!

My Dark Imperium poxwalker posts for this mob:

This one seems to be enjoying the party.

Three eyes are better than two!

Members of the band.

Into the red mist.

Those bug eyes gave me some trouble.

One on the left seems to be turning to liquid metal or tar or something.

Ghost tentacles for the Tentacle Gods!

Although it took me three years to get the full mob painted, my poxwalkers have certainly distinguished themselves in battle, along with their running mates the plaguebearers, especially during that fruitful time of mid-2017 through 2018, when I was playing games of Warhammer 40K almost every week.

Confused march toward enemy lines. I don’t think they are all sure which way to go.

Tearing down a tower to eat a sniper.

Get off my tank!

I’ve built up a pretty decent-sized force of minor Nurgle troops thus far.  Twenty plaguebearers with a couple of minor leader types, the poxwalkers (of course) and let’s not forget the semi-official mascots including Toad, Rusty the rust monster, and the bit box skeletal snake thingie.

So what’s next Nurgle-wise?  I have no shortage of projects to choose from, but the one that shines turgidly forth burbling out to be kicked back to the top of the painting heap is my long suffering daemon engine, Becky the Bloat Drone.  She has been abandoned not once but twice and maybe even thrice, though I’ve lost track so I am not sure about that.  We’ll have to see what we can do to remedy the situation once Frank’s Pig Demon is done.

Being a daemon engine ain’t easy.

Until next time, qapla’ and … 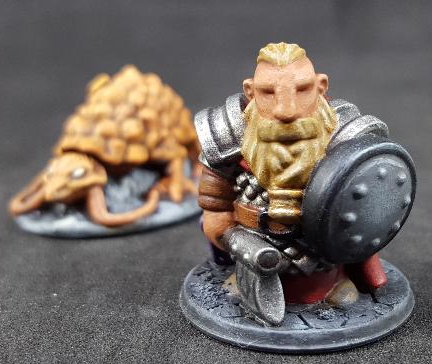 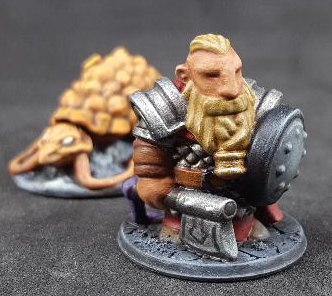 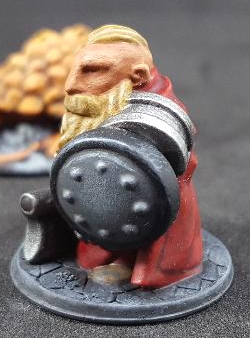 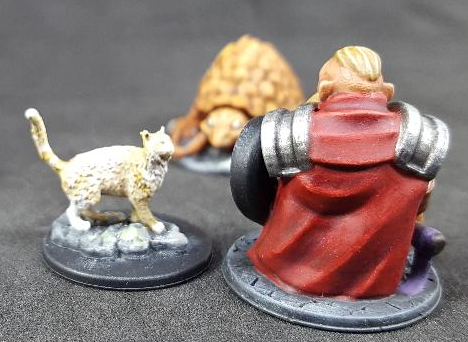 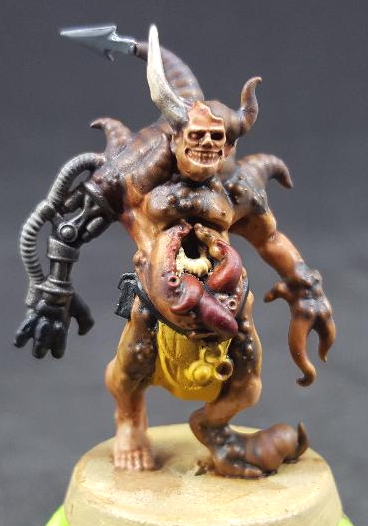 As is often my practice, I inserted another miniature into my current painting project, thus helping to ensure that I either fail deadlines or have to scramble last minute to meet them.  Since the current painting challenge I’m working on is my own and the first one I’ve ever done, I think it is best that I continue with my traditional best practices.  So enter the Rust Turtle! 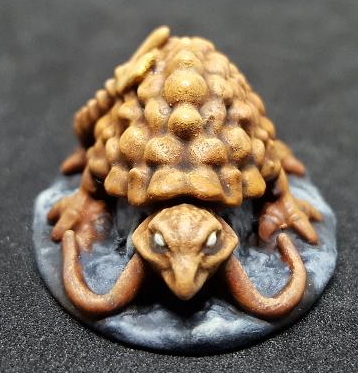 Dungeons & Dragons veterans will surely recognize this little bug as a rust monster.  I showed these pictures to a friend, who said, “Huh, it looks like a tortoise,” and so I decided that forevermore this beastie would be henceforth known as the Rust Turtle.*

Painting the miniature was pretty simple.  I slathered on some Vallejo Rust wash (76.506) and a couple of layers of Agrax Earthshade, to damp down the orange effect a bit.**  I also applied a layer of undiluted Skeletal Horde Contrast paint, much like a wash.  I probably wouldn’t bother with that next time, but I wanted to experiment and it didn’t seem to add much either way. 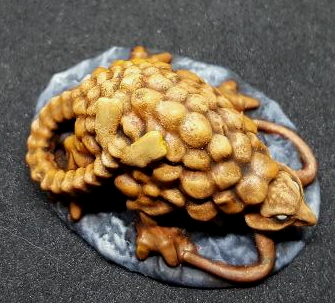 I busted out all of my various shades of orange and just started drybrushing until I liked how the turtle looked.  I tried various mottling and speckling effects on the propeller tail and dorsal area, didn’t like any of them so overbrushed with various light shades of orange and covered up the mess.

I used Ungor Flesh and Kislev Flesh sparingly as a final highlight.  The base was just gray, wash with black ink, then drybrush various shades of gray and finish off with some off-white.

I remember getting quite a laugh from this cartoon as a kid.  Funny because it was true!

I originally wanted the eyes to be silver so that is how I painted them.  I ended up going with white though, which I think looks better.  I thought about making pupils and all of those fiddly ocular bits, but decided to stick with simple and not mess with all of that.  Also toyed with the idea of trying some OSL effects, but again, opted for simple.

While I think there is more I could have done with my rust turtle, I’m happy where I stopped.  It will make a fun monster to throw into one of my D&D games, and a good pet to hang out with my slumbering Nurgle forces along with skeletal snake thingie and others. 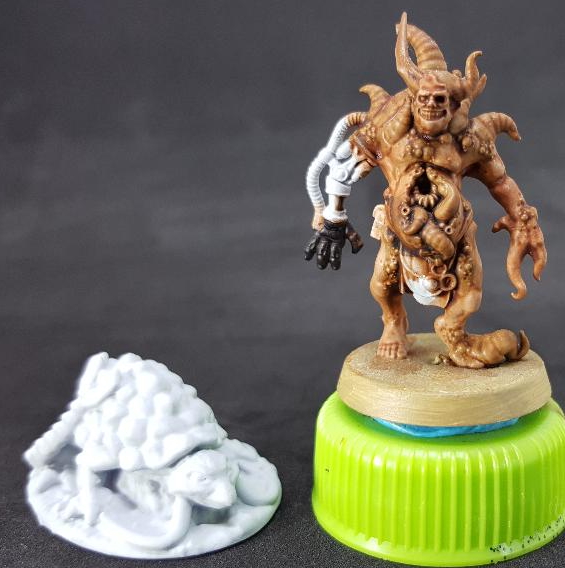 My first dwarf is done.  I’m going to take some pictures of him today, so he will feature prominently in my next post.  His orange-bearded axe and shield brother is about 75% done and the other two around 50%.  A good thing because this month is going by quickly, as months always do when you have a self-imposed deadline.  Fortunately my painting challenge ends after April 3rd so I have high hopes of finishing all four dwarves.  Maybe I’ll be able to include Neglected WIP Poxwalker #18 as a stretch goal.  Probably won’t but wouldn’t it be grand?

I’m wondering if I should do another painting challenge for April?  I very well might, since the March challenge is keeping me working steadily on my dwarves.  Any ideas about what kind of challenge might be of interest?

Another model has made its fully painted appearance for the March Might and Magic Painting Challenge.  Argentbadger from The Bovine Overlord presents his painted Kharybdis, for the Cryx faction of the Warmachine range.  Argentbadger reports that this lovely, betentacled monstrosity is “focused on melee” and has an “amusing ink spray.”  I bet it is … and does!  Thank you, Argent! 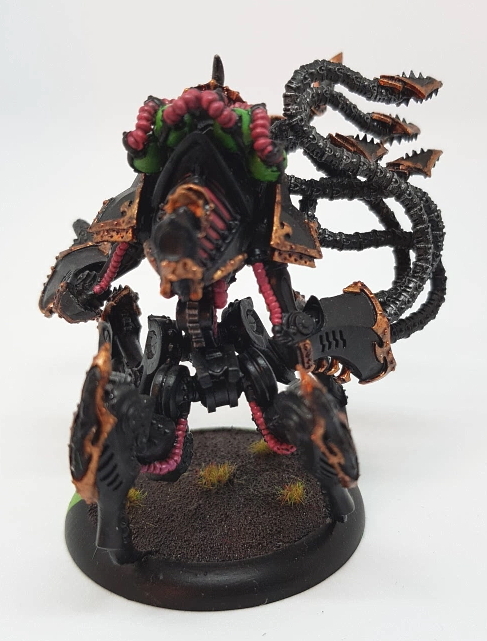 Kharybdis by Argentbadger from The Bovine Overlord.

* The miniature is listed on the Etsy site, where I purchased it, as a Dire Oxidation Monster.  Perhaps that is the official, scientific name?  It certainly qualifies for the “might” portion of my painting challenge.  I remember few monsters from my old days of D&D that could cause the gnashing of player teeth quite like a rust monster!