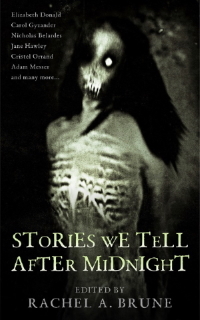 “Here, the shadows keep their secrets and the moon hides from deeds cast in her glow.  In these pages, the Fae walk as human, the dead burn with their anger at the living, the creatures that live in the dark places of the wrong zip code creep out of the shadows and into the kitchen.”  — Crone Girls Press

Stories We Tell After Midnight is the debut anthology of short, horror fiction from Rachel A. Brune’s Crone Girls Press.  This book was my bedtime literary companion for a few nights and I found it an enjoyable read.  The stories varied in length from flash fiction to longer short stories.  Like pretty much all anthologies, the quality of the tales varied.  Some of the stories were excellent, some average, and a couple didn’t work for me.  Even with the stories that I thought fell flat, I did appreciate that the authors were taking chances.

This authorial taking of chances is something that I haven’t seen much of with the short fiction I’ve been reading lately, and made for an interesting change of pace.  This is probably because I have been reading a lot of fiction online.  Such work often tends to play it safe for reasons such as restrictive terms of service and risks the risk of feeling sanitized or politically correct.

Stories We Tell After Midnight is a refreshing alternative and gives us none of that.

The stories “go places” I haven’t seen lately.  Children in dangerous situations, terrors that seem familiar from recent headlines, unsavory culinary habits and sexual manipulations, to name a few.  Brune chooses work by authors who can sojourn into this dark country but do so without crossing the border into bad taste, even if in one case the author does drag his toe along that line, in my opinion.

Sometimes, Horror has to sojourn down twisted, borderland roads.

I also enjoyed how the stories took place in different eras and places.  There were tales set during the mid and late-19th Century up to the present day.*  I liked how the horrors varied between the entirely mundane to the magical/supernatural, and I appreciated the magic realism that permeated many of these evocative settings.

My favorite three stories in no particular order were:** 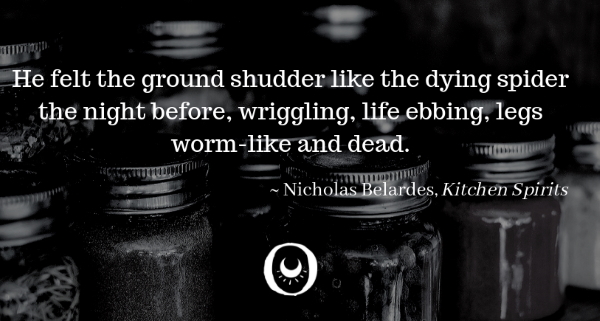 I just realized my top three picks all involved food one of sort or another!

“Kitchen Spirits” by Nicholas Berlardes introduces us to the recently widowed Pascual, who is having nightmares of his “re-animated wife” and seeing “a thing with crab-like legs” with “a corpse-colored tongue” sampling dead rats in his driveway.  Mostly, he wants to be left alone with his sorrow, microwaved refried beans and Netflix.  He also doesn’t want anyone messing with his cat, Panchito.  I can understand that, though one feels sorry for him as a man who has lost his old life and his purpose.

I enjoyed Pascual’s internal dialogue as he tries to cope with his current existence and broken heart while “visions of corpses infected his mind.”  If that wasn’t enough, throw in a pesky, teenage neighbor, who was given to “blabbing about some monster-filled dungeon he’d concocted for his stupid geek friends,” while delivering warnings about “bad mojo.”

As Pascual becomes more disturbed, and the environs around his house more sinister and seemingly unclean, one wonders if the kid might not have a point.

I enjoyed reading how Pascual ended up reacting once the full horror of the situation was revealed.  He seemed very human.  What made this a real page turner, of course, was hoping the cat didn’t take one in the neck.  You’ll have to read the story for yourself to find out what happens with Panchito. 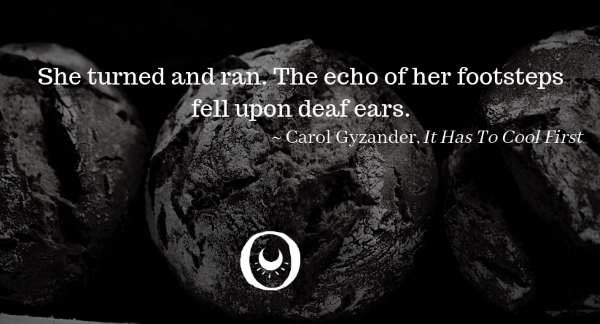 Sure, take a big bite but watch out for your fillings!

“It Has to Cool First” is set in late-19th Century Atlantic City where two young orphans, Jeremy and his younger sister, Mary, try to obtain work.***  Any work so they might survive.  Jeremy is particularly appealing for his indefatigable willingness to strive, despite his tender years, to secure the immediate survival and possibility of a bright future for himself and Mary.

They end up at the Keuhnle Hotel at a bakery run by the sinister Herr Holdermann.

I enjoyed how Gyzander led me down the magical realism rabbit hole through addiction to a horrific outcome where the last line brings the story full circle to a satisfactory, evil conclusion, but with more questions and the possibility for alternative futures I can spin out in my head as a reader.  Horror that is more of the same?  A long and complicated Revenge?  What do the other people in the town and associated with the hotel really know about the bakery?  You get the idea.

You get extra evil monster points for taunting the kid when you know he’s hooked!

“Gobbl’uns” is a story of childhood jealousies and monsters under the bed.  Poor Charlie, on his sixth birthday, has to deal with the fact that his parents are much more focused on the needs of his younger brother than they are with the horrors that might be lurking under his bed, despite his father’s “monster repellent.”

What appealed me to most about this story was the masterful job the author did in capturing the essence of young Charlie through an adult, third-person voice.  I smiled at Charlie making a protective picket of his stuffed animals against the monsters and by the end understood (and sympathized a little) with his sibling rivalry, even while things didn’t work out quite like how the boy probably imagined or hoped they would. 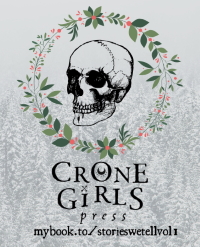 Stories We Tell After Midnight was a dark, attractive read.  The plots were straight-forward, the writing crisp, and the settings varied and evocative, which makes for good bedtime reading.  I would only give this book a miss if you are highly sensitive or easily triggered, in which case I would respectfully ask why you are reading adult horror in the first place?

Congratulations to Crone Girls Place for a solid, debut offering.  As someone who enjoys a bit of horror tourism, I look forward to seeing the tormented landscapes Editor Brune takes us next.

This is an unsolicited review for which I received no compensation. All graphics used with permission of Crone Girls Press.****

* Would have been fun to see a story set in some sort of dark fantastic or science fiction future, though the lack of this in no way diminished my enjoyment of the anthology.

*** It is fun when an author pulls from history, especially when they don’t tell you they are doing so.  (Several of the stories do this.)  Keuhnle’s Hotel, where Gyzander’s story is set, was built in 1875 by the father of Commodore Louis Keuhnle, who puts in an early appearance in the story.  According to Wikipedia, Keuhnle’s in Atlantic City was a “prime meeting place for some of the time’s earliest gangsters, racketeers, politicians, and unscrupulous entrepreneurs.”  Sounds to me like it was a place where people really knew how to party!

*** This I swear as a Chaos Lady and a supporting adept of the October Egregore, and upon the holy tentacles of the Dark Gods’ minions who handle such oaths as well as the ghost of Commodore Keuhnle!