I finished Commissar Poxwalker #19 here before its counterpart, Khorne Flower Poxwalker #20, who is also a commissar, as chance would have it.*  The picture-taking got a little out of order but I’ve gotten that all sorted and can now present this (not quite) latest addition to my foetid forces. 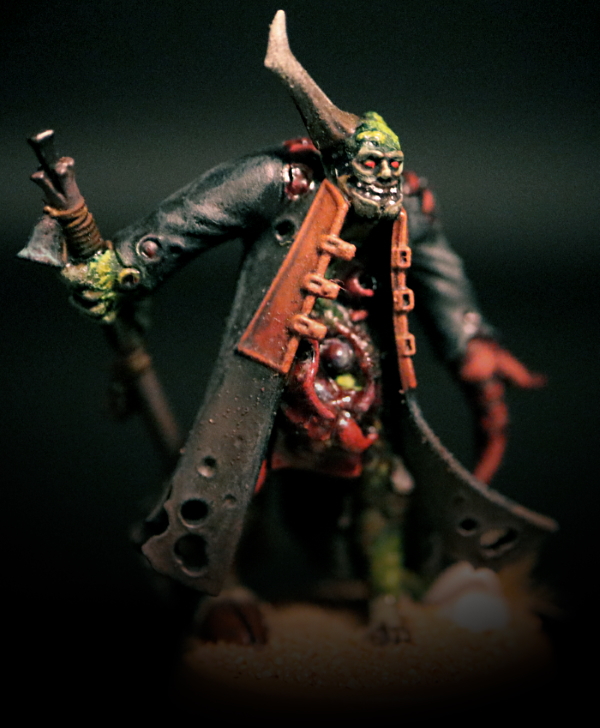 There wasn’t a lot of blister and pox highlighting to be done on this one, because of the greatcoat, so I thought I’d go for a fairly mild case of yellow mold.**  This time I was careful to spread the texture paste without pulling away the paste too much with my sculpting tool.  I wasn’t going for a bunch of little spiky bits like I got on my poxbringer’s arm.

… and same poxwalker after.

I forget how I painted the mold this time, but it looks like I used some bright green, followed by bright yellow and then a glaze from maybe Waywatcher Green or perhaps Biel-Tan Green with a little satin finish.  I’ll have to try this again and write down what I did next time so I don’t forget in the time between completing the model and typing up a blog post.

I did the dorsal tentacles and left arm with Flesh Tearers Red Contrast and Nuln Oil Gloss, then brightened them up with some thinned down Blood Angels Red Contrast followed by Evil Sun Scarlet.  I used Basilicanum Grey Contrast to emphasize the separations between the tentacles.  I find using contrast paint in this way easier than using washes because the former don’t flow all over the place so one can be a bit more targeted.

I’ve been having fun lately doing a little post-production with my pictures.***  So we’ll wrap up Commissar Poxwalker’s moment in the Verdigris Sun with a few of these sort of offerings.  Don’t mind Bits Box Skeletal Snake Thingie; I think it has spent so many years entombed in the sepulchral darkness of the game store bits box that it grabs any chance for attention it can get.  Truly, it is incredibly needy for a mindless undead.**** 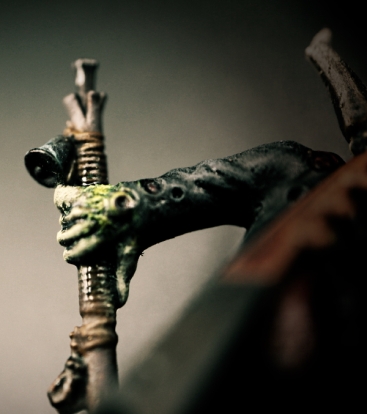 So that is it for this penultimate poxwalker post.  I’ll do one more of the whole crew and put paid to this playful party of putrescent perambulators.  I’m continuing to work on Frank’s Pig Demon, which I hope to have done before the end of June, since that is my planned offering for the Miniatures of Magnitude Painting Challenge.

* Or possesses the greatcoat of a commissar, which can be much the same thing at times.

** I had a bit of a chuckle reading what my poxbringer had to say about yellow mold almost two years ago now.  I had completely forgotten about our little chat.

*** If this continues I might have to break down and learn how to use Photoshop versus just fiddling around with the little paint program I’m currently fumbling around with.

**** For instance, Skeletal Snake is constantly reminding me that it “never got its own blog post and just got stuck in with some badly-painted poxwalkers like 30 years ago.”  Even though I’ve promised to use it in a D&D game someday and have given this pestiferous haunt a place as a token/marker/mascot in my forces, I still have to put up with its whining.  This is surely not what I expected when I began perusing forbidden tomes and conducting vile painting experiments.  Oh well, now it’s got me whining too.  Such is the hard life of a Necromantrix!