I finished my first Etsy Bugbear with a mace and shield last night and took some pictures this morning.  I’m fairly happy with him because whatever shortcomings he has paint-wise I do think he does look suitably powerful and brutal.  I can’t help but think that my new friend here would be at home in a Robert E. Howard Weird Tales story. 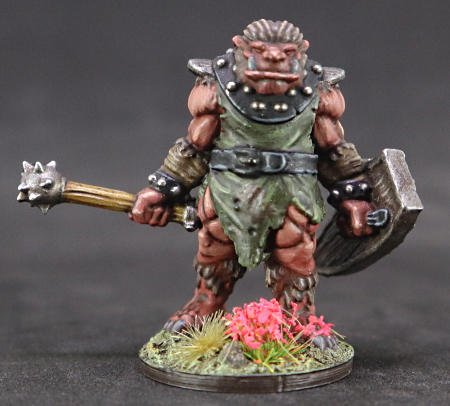 Of the three miniatures this one is my favorite pose.

For the flesh I base coated with Doombull Brown, washed the whole miniature with Agrax Earthshade, then painted the muscles with Tuskor Fur.  Then I highlighted with about a 50/50 mix of Tuskor Fur and Kislev Flesh, and washed the whole thing (optionally, I think now) with a glaze of Contrast Medium and Reikland Fleshshade.  I finished the flesh with some very small highlights of Kislev, and some Bugman’s Glow along the upper part of his lip.

I haven’t tried to do much with flesh in the past, so this is the beginning of a learning curve for me.  One thing I’m discovering is that once I get past the Doombull stage it is good to dilute my paints on the palette so they are translucent and work on building up color on the muscles.  I will try to keep this in mind for the next two bugbears and going forward in general.* 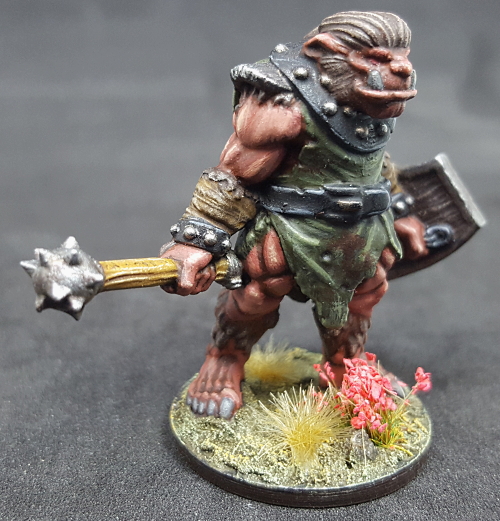 Tusks and teeth were Dawnstone, Agrax, then highlights.

I painted the leather tunic with Vallejo Russian Green (70.894), washed with Agrax Earthshade and then highlighted with Nurgling Green.

I also experimented with some patches of Nurgling Green to try and make the leather look somewhat old and worn in places.  I’m going to play around with that some more with the next bugbear, which will be good practice trying to develop that technique.  Also, next time I think I might do the highlights of the raised folds with a slightly darker color than I used here to see if I like the results better. 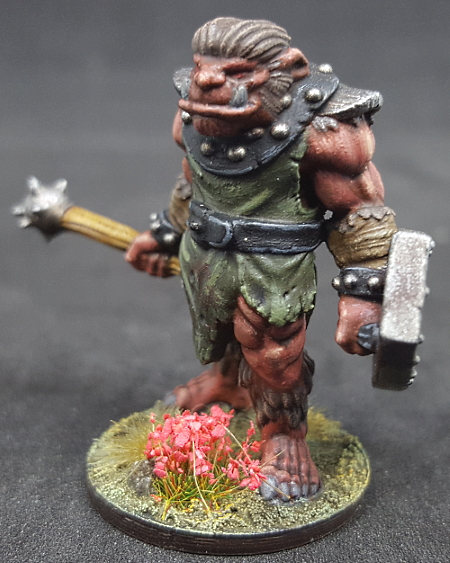 I wanted to do something other than my usual “glue on some sand and maybe a rock and bush and call it a day” basing method that I’ve been doing for the last five or six years.**  So out tried out the Slyvaneth Base from Warhammer TV.  Turned out to be simple, which I liked.  The base was primed with Rhinox Hide like the rest of the miniature.  I covered the base with Vallejo Dark Earth (26.218) Texture and glued down a little rock that wanted to come home with me during one of my early morning Social Distancing in the Darkness Hikes up in the hills.***

From there I dabbed Death World Forest all over the base so that the brown texture still showed through.  After that, I washed the base with Athonian Camoshade and dry brushed with Nurgling Green.  Then a light dry brush in patches (not the whole base) with Averland Sunset and finished it off by adding the flowers and brush.  (Chose tan brush over green because his tunic was green.) 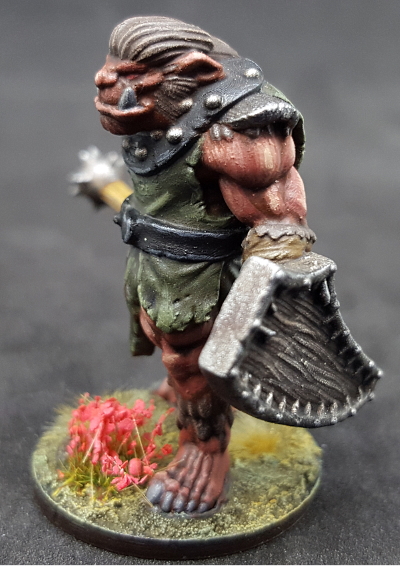 So this fellow with enter the painted ranks for my own contribution to the April painting challenge, which ends on May 3rd.  I’m not sure what I’m going to do for a painting challenge for May yet.  I have a day or two because in keeping with tradition the May challenge won’t end until June 3rd.  I don’t find myself tired of doing challenges yet or feeling like I need a break, so I’ll come up with something.  Not surprisingly it’ll be something that will feed in to what I hope to accomplish myself this month.

In the meantime, I’m looking forward to getting started on the April challenge round-up.  It is going to be a large one with lots of great models from many different artists! 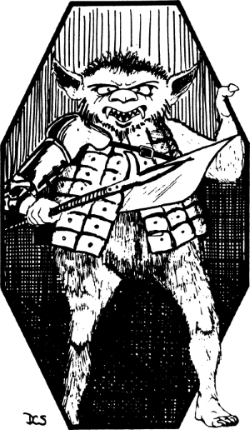 This is how bugbears look in real life!

* In addition to the trio of mace bears, I also have three more Etsy bugbears with halberds who are anxiously anticipating any artistic attention that might come their way hopefully (for them) sooner rather than later.

** I’ve been continuing with this “desert basing” method with my poxwalkers because I want the mob to be uniform.  Once they are done, I think I’m going to try some desert texture products on future Nurgle forces.

*** I know the rock wanted to come home with me because I had to shake it out of my shoe and it was a sharp little bugger too.  Ouch!