I finished Work-in-Progress (Nurgle Alert!) Poxwalker #18 the other day so MAGPPXWLKER-XVII has a special friend now.*  Despite my glacial pace, I’m currently in real danger of actually finishing up the Dark Imperium contagion-zombie mob.**  Whatever happens, I’ve completed a little “crap I already own” for the April painting challenge and I’m feeling pretty good about that! 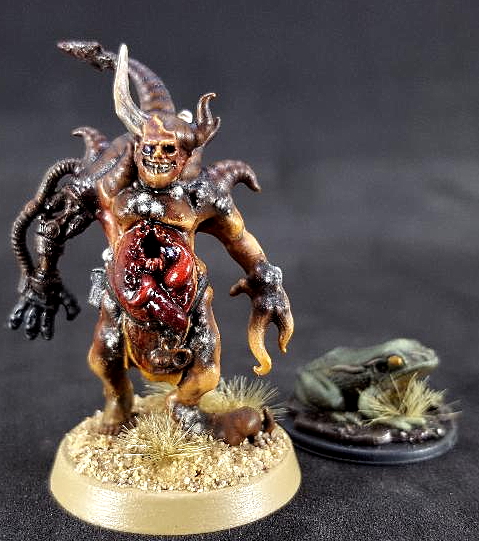 Toad and I sort of like how this picture came out.

I started work on this poxwalker a long time ago and managed to drop it on the floor during one of my painting sessions.  This broke the tip off the large, overhead tentacle.  I set the miniature aside, possibly in disgust, and forgot about it for a year or so.  When I got back to work on it again, I had completely forgotten about the broken tentacle tip until I chanced to notice it once more.  As unpleasant surprises go, it was the gift that kept on giving!

I thought about maybe trying to whittle the offending appendage down a bit or repairing it with green stuff.  In the end I decided to rummage through my bits and see if I could make lemonade out of rotten lemons.  After several false tries (I really wish the hook had worked out) I ended up cutting a spear point-looking thing off the end of a chain bit from an old chaos space marine biker sprue and affixing it as you see here. 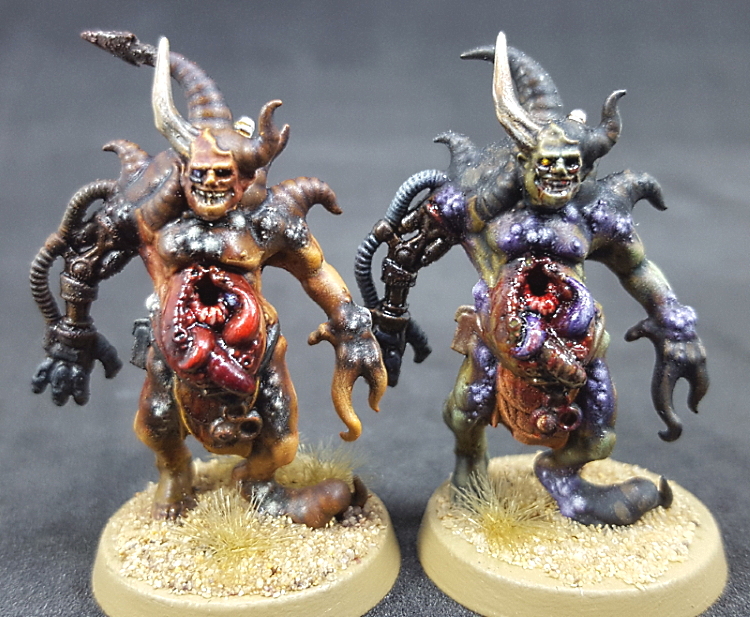 I forget exactly how I painted the tentacles on #18, but I think I started out as I usually do with some Agrax Earthshade and maybe some Athonian Camoshade and/or thinned down Nuln Oil.  What I did do differently was after the washes I applied several layers of Skeletal Horde Contrast.  Then I went to do some tentacle highlight work, like I did on #17, when I realized that I didn’t really need to.  I could have but the washes in conjunction with the contrast paint brought the brown tentacles to a state that I was satisfied with for some random zombie.  As a final step, I used some Basilicanum Grey Contrast in the recesses between the tentacles.

The lighter red ventral tentacles were painted with Blood Angels Red Contrast and then highlighted with various shades of red up through Wild Rider Red.  Then I tied them together with a mix of Blood for the Blood God, Lahmian Medium and old Baal Red I still have hanging around.

The darker ventral tentacle was painted with Flesh Tearers Red Contrast and then washed with Glossy Nuln Oil.  For the ventral area in general I used more Glossy Nuln Oil to impart some shine to the recessed areas and Minitaire Satin Coat where I wanted shine but didn’t want to add more color. 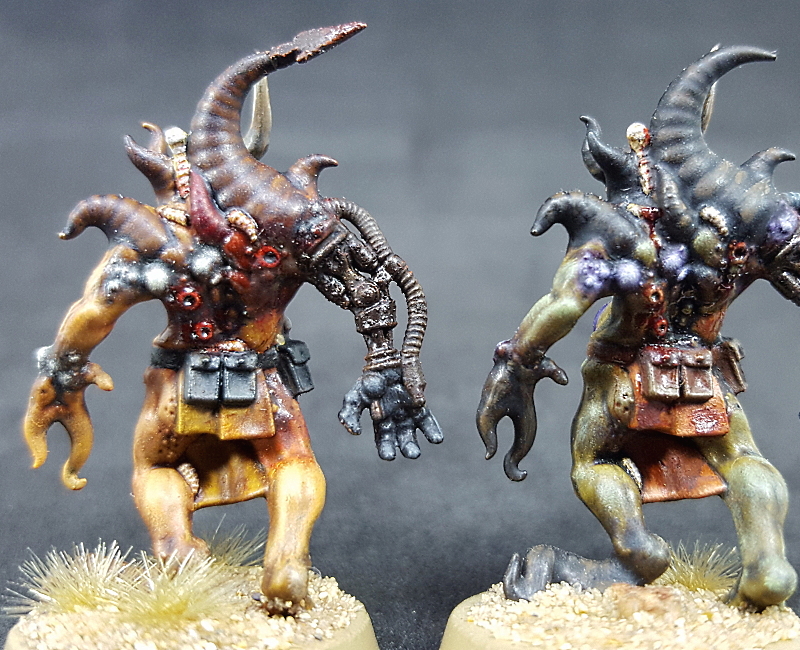 Might have to try Wudugast’s blue maggots on Poxwalker #20 perhaps.

I haven’t quite decided what else I want to finish this month.  I could go for broke and perhaps finish Poxwalker #19, though I also have a trio of Etsy bugbears with maces and shields that I quite favor too.  So many choices and the challenge deadline of May 3rd will be here before you know it.  I’ll have to decide soon.

* Perhaps a good, Death Guard name for the latest addition to my Indolent Forces might be Mechanical Arm that Works Kind of Crappily Somewhat Orange Poxwalker #18 or (MAWKCSOPXWLKR-XVIII)?  What it lacks in clarity I think it makes up for in pedantry.

** I put the Dark Imperium primaris space marines versus Death Guard boxed set on pre-order and picked it up the day it released in mid-2017.  I then immediately put together and started painting the poxwalkers, but got distracted by plaguebearers.  (I was assured by several people this can happen to anyone.)  I finished the first two poxwalkers in early September 2017.  Given that I’ve not only finished #18 but have actually started eyeing #19, there is a real chance I might actually finish the full mob of 20 within the next three years!  Not too shabby.

I’ll probably paint the six easy-to-build poxwalkers too at some point (I love the idea of a grenade flail!), but I wonder if I should even bother with the 150 or so more I have that people have given me over the years or sold to me for a nominal sum like, “Here’s 20 of these useless dudes I’ll never use; buy me a Coke or something?”