My second dwarf turned out to be a bit stubborn, which I shouldn’t be surprised about considering he’s a dwarf after all and they are kind of known for that.  He’s done for now so all’s well that ends well.

It is going to be a close shave indeed finishing my other two dwarves by midnight, April 3rd for the March Might & Magic challenge, but I’m going to give it the old community college try.  I worked a bit on them last night and tomorrow is Friday, so I’m prepared to burn the pre-midnight oil to make it happen! 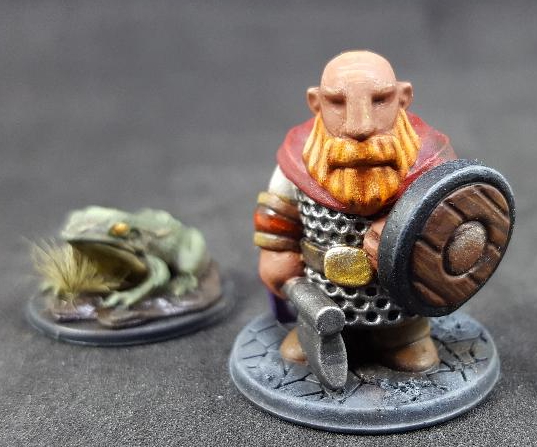 Styling with our friend, Toad.

I used Duncan’s tutorial off of Warhammer TV for the dwarf’s ginger beard.  Primed white, based with Jokaero Orange, then washed with Agrax Earthshade and a final highlight with Fire Dragon Bright.  It was pretty easy and I like how it came out.

His bracer started out looking exactly like the first dwarf’s.  After a bunch of fiddling with various colors and mucking about with Spiritstone Red I ended up with what you see here.  It isn’t obvious in the picture but there is a bit of a flame undertone going on with the red part that was an accident I ended up liking.  Perhaps he has some sort of magical Flame Bracer?* 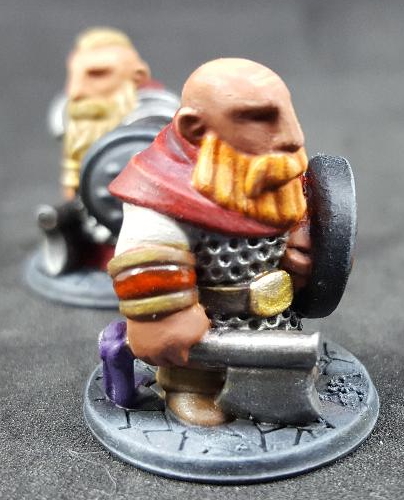 Don’t think his beard is quite so bright in person.

Finally, I propped him up like he was walking up an incline or something to get a better look at his shield.

For the shield boss I originally used the crusty remains of an old bottle of Tin Bitz and some Agrax, but changed my mind and based again with Balthasar Gold.  (I followed Duncan’s Bronze Armor video.)  Washed with Druchii Violet, reapplied the gold, making sure not to obscure the violet around the edges too much.  Then a highlight of Sycorax Bronze and Stormhost Silver. 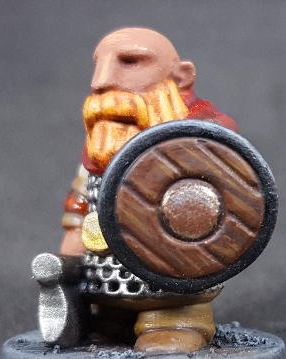 I tried to do the highlights so it looks like the light is hitting the top of his boss since he is holding his shield at an angle, which is evident in the first picture where he isn’t propped up.

I forget what colors I used for the wooden part exactly, but I followed some of the ideas from a Heroes & Bosses video.  The general idea is to base in a wood color and then paint variously colored stripes along with the grain.  Then wash to blend it all together.

So next up is the dwarf with the musket.  If I remain on a schedule that will give me any kind of a prayer at all of meeting the April 3rd deadline then I’ll finish him tonight.  Until then, take care everyone!

* I realized about twelve hours after I finished the miniature that I subconsciously made a bracer much like the one from a friend’s cosplay “warrior princess” costume that she used to wear to con’s until she had a couple of kids and couldn’t fit into it anymore, alas.  (It all worked out though because eventually she got back into shape but unfortunately she had sold the costume.)  Anyway, her bracer had a glossy, lacquered stripe in the middle except instead of red the one she had was purple and instead of a fire thing it had sort of a black knotwork design.