Continuing along with my four work-in-progress dwarves.  I’m happy with my progress so far and think I’ll have no problem meeting the April 3rd deadline for my March Might and Magic Painting Challenge.  If you’d like to join there is still time.  A single miniature is welcome, in addition to squads, mobs, and so on. 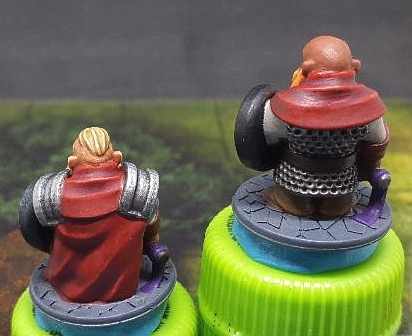 Gave up soda years ago, but the caps linger on.

I’m fairly pleased with how the cloaks turned out.  As is sometimes the case, I think they look a bit better in person than what I could squeeze out of my cell phone camera.  I used Warhammer TV’s video, How to Paint: Space Marine Cloaks as my inspiration, though I varied slightly from what they did, so I’ll list the steps here for anyone who is interested and my own edification a year from now when I can’t remember what I did and want to do it again.

Dwarf Red Cloaks
(Except for step 2, all of the steps using contrast paints including watering them down with medium.)

I noticed a pingback for the first finished miniature (at least that I know of) for the painting challenge.  Hearteater** from Games Workshop’s Untamed Beasts by the inconceivable Wudugast of Convert or Die.  So in celebration, let us wrap things up with a look at Wudugast’s worthy in all his feral might! 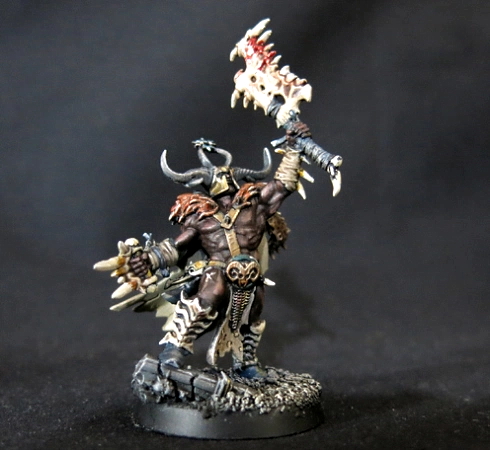 Like that jawbone axe.  Wish I had one of those myself at times.

I really liked Wudugast’s choice for the flesh here.  I asked him about it and he said that he used Rhinox Hide, then Dryad Bark, and finally Baneblade Brown.  I might have to give this a try myself at some point.  I wonder if some sort of brown glaze as a final step would tie it all together?  He did a great job and painted a worthy addition for his growing warband.

* I find that I like this Basilicanum Grey Contrast muck for edging borders and such.

** I like how Wudugast made a proper name of “Hearteater,” which seems a suitable sobriquet, versus Games Workshop’s using it as more of a title alongside colleagues such as First Fang and Preytakers.