I decided that maybe I wanted to get four of my dwarves from last time done soon, rather than just picking away at them haphazardly until they are finished.  Such methods result in completed projects, albeit at a somewhat glacial pace.  The reason for my sudden alacrity is I want to run a one-shot Dungeons & Dragons adventure for up to four players using pregenerated dwarf characters.

So even though it is a little late in the game, I decided to take up Stepping Between Games’s Squaduary painting challenge as a way to motivate myself with a hideously looming deadline.  The idea of Squaduary is you complete a unit of troops and post your progress with the completed squad by the end of February.*  In this case “unit of troops” will be an “adventuring party.”

My Squaduary Attempt (Left to Right): Wizard, Cleric, Fighter, and maybe a Ranger.

I had to figure out what I wanted to do with the guy with the musket in a game where I don’t want any actual firearms, so I decided that he’s a wizard who uses it as a prop or “spell focus” (using proper D&D jargon) to cast his spells.  A little never-runs-out magic gem powder in the pan, a bit of prestidigitation producing a bit of flame and pow!  This time Magic Missiles for everyone!  Next time Stinking Cloud!  Might be amusing, who knows?** 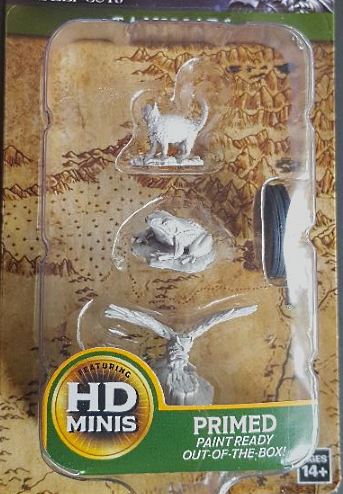 Now all good adepts will agree that every wizard needs a familiar and it just happens that I have a pack of three gathering dust.  I thought the toad most appropriate for a dwarf wizard, though any of them would be fine.  Also happens I am partial to toads and amphibians in general so there’s that too. 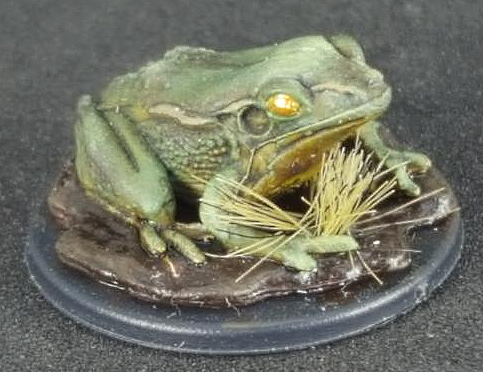 Oddly, all those little scratches were only revealed by the camera!

I kept our magician’s familiar pretty basic, though I think it’s cute.  I thought the gold eyes came out better than they look in the picture, but I want to get this post up so I don’t have time to redo them.  I’m sure we’ll be seeing Toad again, since I plan on posting a WIP dwarf picture in a couple of days, so maybe they’ll come out better next time if I’m lucky. 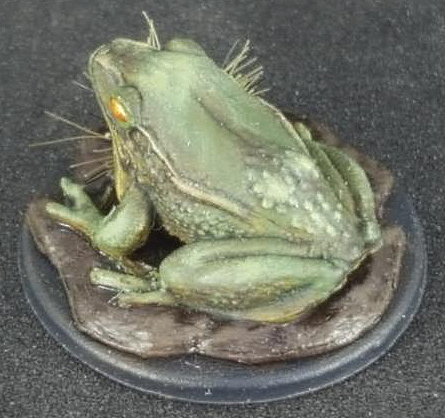 For next time, I am nearly done with Poxwalker #17, and plan of getting a picture of my soon-to-be-completely-and-long-suffering zombie up soon.  (Toad will probably put in an appearance then too.)  I also plan on a quick picture of my current progress with the dwarves for the Squaduary challenge.

* Or the day before the end of February since we get a bonus day this year it being a leap year and all.

** If the idea proves popular, I might incorporate the idea of dwarf and gnome magicians using staves and wands that look like muskets and pistols while not actually changing any of the game mechanics.

20 thoughts on “Squaduary and Toad Familiar”