NB: To anyone wondering what by the Emperor’s left <redacted> this is all about:  Greetings, imperial scum.  I recently started running a D&D game and thought it might be fun to keep track of the public parts of the campaign and my inveterate world building with a sort of in-character “newspaper.”  So The Dragon Egg Gazette is born and now I turn over the reins to that precocious (and maybe a little precious) dragonborn and elf duo, Biri and Thulunil.

From the Editor’s Desk

Welcome to the inaugural issue of The Dragon Egg Gazette!  My name is Biri of Dragon Egg … of course.  I prefer to be called Wondermist by my friends, and I’m the editor-in-chief.  This newspaper is my required Outside Project for school and I’m really excited about it.

If you would like to contribute an article, please let me know in the comments.  You can also contact us through the email on the About page.  If you contribute articles at least once in awhile, I’ll list you as a contributing editor!  You can leave your letters to the editor in the comments too, and we just might print yours.

This is a really awful map of The Enchanted Forest.  They should get a cartography teacher so someone can make some decent maps, but for now this will have to do.  Who even knows if it is accurate?  You can click on the map for a much larger version, but I’m not responsible for broken crystal balls! 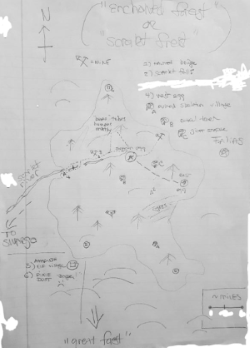 In the next issue we’ll learn a little more about some of the towns and places like The Giant Statue and The Haunted Bridge!

I just started running a Dungeons & Dragons (5e) game after taking many years off from roleplaying.  So far I am enjoying reading through the new books.  I see they brought player character “backgrounds” back from earlier editions so your alter ego was a tinker, tailor, soldier or spy before he was a protagonist.  The player comes up with, or rolls for, a personality trait, and some other basic stuff like a flaw or an ideal they have.  In return the character gets in-game benefits.

At first I kind of wrinkled my nose a little at all of this.  After all, back when I played I walked to the game up hill both ways in the snow (remember, I’m from Maine and couldn’t cast Fly then) and wouldn’t dream of playing a character with less than ten pages of history and background.  I certainly didn’t need to be bribed with free skills.

Anyway, I thought about it some and had a change of heart.  Now I like the idea.  As a DM I really enjoy world building to the point where I make up stuff that the players never learn about and I know they never will when I make it up.  I also enjoy at least some of the players having ties to the world outside of just “the party.”  I’ve found that there are some players, who I cherish as kindred spirits, who also enjoy a similar style of play.  For the ones that don’t, I have learned over the years not to force things.  Enforcing your play style and preferences on people is bad enough when players do it, but worse still when the perpetrator is the DM.

So what I’m going to do is provide some small in-game benefits for those belonging to certain groups.  If you don’t want the benefits, you can happily ignore the group and they aren’t so great that your character will be behind if he doesn’t have them.  Some people will probably sort of go along halfheartedly with my nonsense to get the buffs while others will find they can tolerate (or even acquire a taste for) a bit more of the kind of thing that keeps my DMing energy levels high.

With that in mind I present the following, which serves as the starting point for the games I’m currently planning on running.  I made no attempt to balance it with the Player’s Handbook backgrounds since everyone has the opportunity to start with this background.

Skill Proficiencies: Perception, Survival.  If you gain these skills from another class, you may substitute one or two other skills that make sense in the context of the Militia.  Athletics, Animal Handling, and Nature are common ones.  If you want something else, I’ll probably say yes.

Tool Proficiencies:  Rudimentary to basic knowledge of the Dragon Egg legal code.  General proficiency with riding horses and the use of canoes and small rowboats.

Equipment: A good, green uniform cloak, wet and cold weather gear, and two badges of office (a green dragon hatching out of an egg).  One is plain for the field, the other fancy for in town. 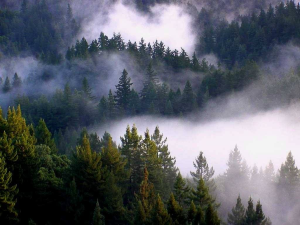 Enchanted Forest as seen via Fly spell.  Click for a larger version.

That a dragonborn’s ability to exhale poison gas begins to develop around the age of 12 to 13, and boys and girls take part in secretive rituals to mark their passage from childhood to becoming adults?  During this time a boy’s comb grows larger and fuller while girls of course develop their adorable cheek spines.

Did you also know that dragonborn consider it insulting to call their children “spawn,” or “a brood?”  They also object to their eggs being called a “clutch” or compared to chicken or goose eggs.  We elves don’t mean anything bad by it and we keep saying stuff like that by accident because of the translation of certain elvish words that are part of the Dracosindarin language.  I think everyone should just get over it and not be so thin-skinned.

However, during a recent interview, Galadriel Ummair, Dragon Egg teacher and noted linguist and arcane archer, stated, “While it is true that many elves can sometimes be insensitive of our dragonborn friends’ oviparous sensibilities, we must try to do better, for as any wizard knows, ‘Words have power.’  After all, we elves don’t like dragonborn calling us ‘Ears,’ in reference to what they, and some humans, see as overly large ears with the characteristic sharp helices.  Indeed, dragonborn do not have visible ears at all.”

This writer would like to point out that his girlfriend and editor of this newspaper says that his ears are his “cutest feature,” and I say the same about her cheek spines.  I do agree that words have power and that it costs nothing to be kind to one another, but they should still get over it.  Thanks for the quote, Mom! 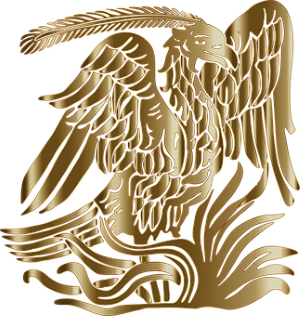