As promised, I offer a couple of pictures of where work-in-progress poxwalker #17 stands since the last time I turned my proverbial painting lens on this worthy zombie.* 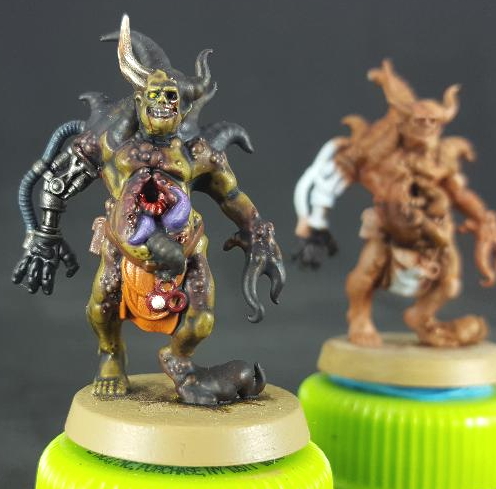 PW#18 waits with undead patience in the fuzzy background.

I still have a bit more work to do, though I’m getting close to the end stages now.  The purple tentacles used to be blue, but I decided they were far too pretty in a wow-that-looks-like-it-would-look-great-on-a-blue-horror pretty and not poxwalker pretty so I hit them with some purple shade.  Upon reflection I might have hit them too hard and maybe I should have used some medium and/or tried blue shade or a blue and purple mix.  I still can, but I’m undecided.  I might leave them more or less as is and just highlight them a little.

After all, they are just a couple of belly tentacles and not really worth too much thought in the scheme of things.  Are there not whole regiments of guardsmen in the world who are still painfully bereft of the Grandfather’s multifarious blessings? 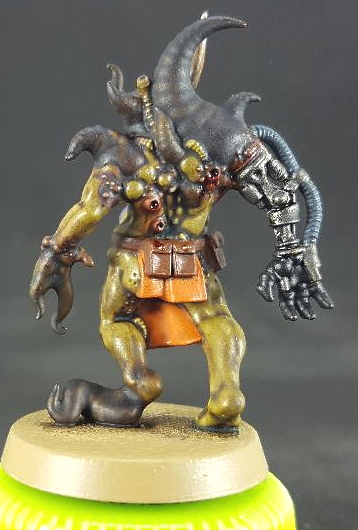 What kind of maggots to go with this time?**

I still have a few decisions to make such as what kind of maggots, and what kind of pox to go with this time.  Maybe Emerald Pox.  I’ve only done that with one other poxwalker, (one of the dreaded beach boy twins) so it isn’t overdone with this mob.***

I’m probably not going to rust up the mechanical arm too much.  Maybe a few Rhinox Hide patches and the like.****  I am thinking of busting out an old brush and the bottle of AK Interactive engine oil and experimenting with that.  I tried glossy Nuln Oil for a bit of fresh oil look, but that didn’t really work for me so far.

Next time I will post some pictures of the fully completed poxwalker #17, a work in progress no longer.  I’ll know it is done by my usual tried-and-true method, which is when my fiddling seems to make things no better and maybe even worse.  That is when I know it is time to stop with many things in life, miniatures and writing both.

*  “Promised” should be construed to mean a non-binding echo of a glimmer of a reflection upon said Humble Narratrix’s part to maybe put up some pictures of WIP-PW#17 if and when it is convenient to do so before becoming distracted by less important things.

**  It is a very good sign when you type “maggot” in the search box for your site and a whole bunch of pages come up!

***  I haven’t forgotten about my idea of having countless hordes of poxwalkers, plaguebearers, etc. and identifying each mob with a different disease.

****  Perhaps the mechnical arm was in good working order when PW#17 was gifted with the blessings of Nurgle rather than the usual state of affairs, which of course is that the rust and falling apart look is in fact a wonderful magic that makes the mechanism in question work at least as and probably better than when it was right off the forge world assembly line.

17 thoughts on “As Promised, Again With WIP Poxwalker #17”