So I spiral out the long, sad task of painting my mob of twenty poxwalkers into late 2019.  I would say, “I’ll finish the lot before 2020!” but we all know that probably has as much truth in it as a short, sharp fit of sneezing meaning nothing but continued perfect health after putting in an eight hour shift driving around a bus full of sick people.*

Here we have Ole #17, who is one of my current works-in-progress.  I gave this poxwalker some attention this past weekend, sketching out the base colors on its belt and loin cloth as well as beginning a little experiment with purple tentacles.  I also put some paint on the Death Guard symbol.  Still a lot more work to go, as you can see, but it’s coming along. 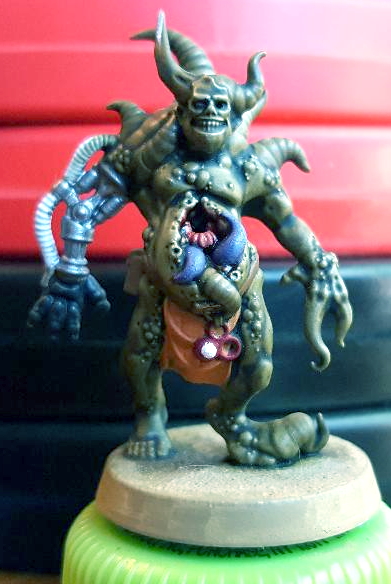 Unfinished but only semi-forgotten!

So far as my Wattpad adventures go, here is what’s been going on there for me lately:

For next time I am hoping for more progress on the aforementioned Ole Number Seventeen, and I might play around a bit with some Plaguebearer Flesh contrast paint I picked up last week.  I can always tell I haven’t been to the game store in a long time when I see a new staff member and she gives me the Welcome to the Store New Customer Speech!

Also plan to work on more of the Spooky Tales prompts and of course Gabby.  Hope everyone who managed to read this far has a good week.  May you make good progress on your varied projects, both mundane and multifarious!

* I was going to say “we all know that would probably be a lie” but I thought it best (for my own continued good relations with the Grandfather if for no other reason) to stick to a Nurgle-based (and rather familiar situation, to your Humble Bus-Driving Narratrix) rather than a Tzeentch-based figure of speech.

** A “drabble” is apparently a 100 word short story.  I didn’t know this until I stumbled upon this tidbit in Wattpad.  I found some interesting information on the subject over on Wikipedia.