Another poxwalker enters the painted ranks, this one being number sixteen of twenty.  A classic example of the Red or Eastern Spiny Backed Poxwalker as coined/pointed out by that Perspicacious Poxwalkerer and Taxonomist, Alexis West.  As she points out in the comments appearing with the post here, this worthy is the “rarer Eastern Spiny Poxwalker … [with its] reddish tones.” 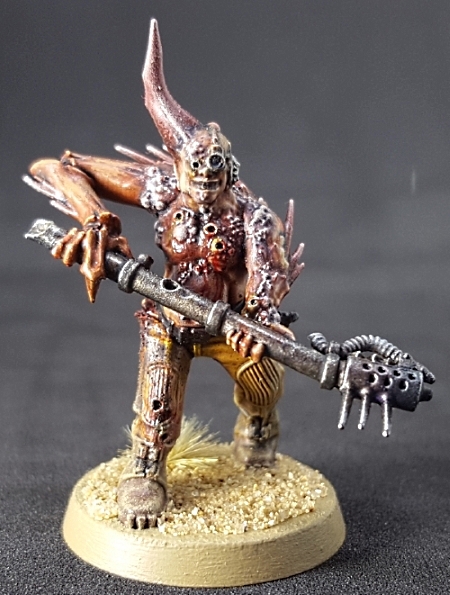 I was originally going for something where the spines/horns/pointy bits were a bit more set off from the rest of the hide, color-wise, but decided that perhaps I was happy with how it turned out more or less.  I find that once they are done, poxwalkers sort of grow on me, and my energies turn toward the next experiment and it is best to close the book and let events take their unnatural course.  After all, what is another soulless minion in a horde of the damned, even if its horns are or aren’t heavily contrasted with the skin in a way satisfying to even the most discriminating warmaster with a eye for color?* 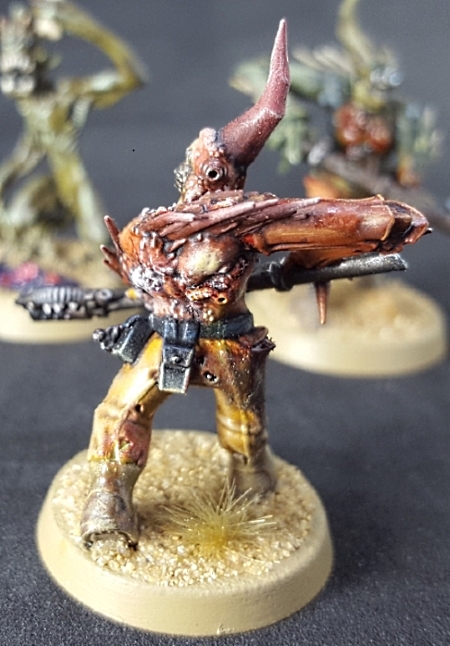 I might add some color to that tan on tan plant…

A funny thing about the yellow pants (and it somehow keeps happening with this mob) … I put quite a bit of effort into the pants and by the end I’m covering up all of my hard work with goop, gore and brown ink.  Then I resolve to not put so much work in to the next poxwalker’s yellow clothes and then I do! 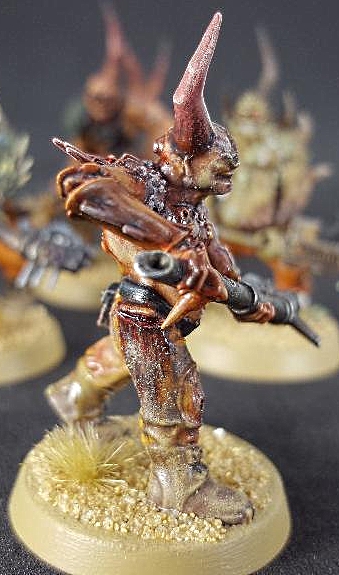 Another view of the formerly yellow pants.  I got particularly carried away here with the ink, blood, toner, sand, and who knows what else.  Oh well, it is all good though because the next time I paint one of the red/yellow poxwalkers I won’t put so much work into the clothes.  Did the weapon pretty much the same as before, though I went for a slightly darker effect with more black with a little brown ink as opposed to the converse, which is what I did on the other Spiny Back.  A pretty subtle difference, I think. 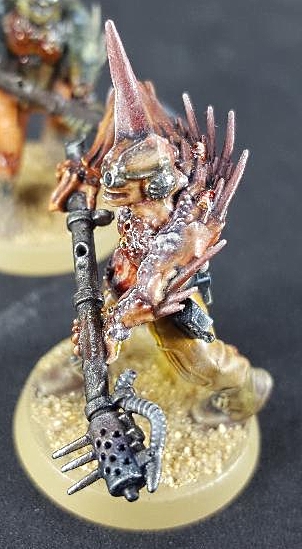 So I’m in the last month of my second MFA class.  I plan on getting another poxwalker done in the interregnum between the end of this class and the start of the next one.**  Also sent some stuff I recently wrote to a few magazines, as well as a poem I wrote over 20 years ago to the school magazine, which made the mistake of telling me that consider previously published work.

* One is of course aware that poxwalkers, strictly speaking are not ‘soulless.’  As stated in the heretical Lexicanum, “The jolly humour of Nurgle is such that they’ve remain cruelly conscious and aware of all that occurs with them, souls of victims trapped in their dead bodies and with a rictus grin they stagger out in search of living meat to feast on.”

Always good (for a Chaos God) to have a sense of humor, I guess, even (or perhaps especially?) at the expense of others.  Better than dour old Khorne, incomprehensible Tzeentch, and most especially the Dark Prince, who seems really great at first, sort of like getting to eat your favorite food and then you find out you are in hell and all you will be doing for eternity is eating your favorite food.  Makes Happy Grandfather seem pretty good by comparison.

** I was going to say “or maybe two!” but that would be sheer hubris.  Of course any good Chaos Lady would just go for it and say “It’s only hubris if you fail,” and upon failing execute any and all involved or who witnessed it, including any star systems where the populations may or may not have heard someone allude to it in a redacted transmission.  But who has time for that?  So I’ll just stick with the one.

West, Alexis. A Taxonomic Discussion of Poxwalkers Common to the Fourteenth Legion After the Death of Pertinax up to the Ascension of Regalianus the Usurper: A Short Study. [REDACTED], 2018 CE