I’ve been at it hammer and tongs continuing work on my poxwalkers.  I completed another one a few days ago, so I now have only five left to finish off the Dark Imperium mob of twenty.  If I pull it off, then I can put the stamp of completion on them for the complete-a-squad portion of Azazel’s March painting challenge. 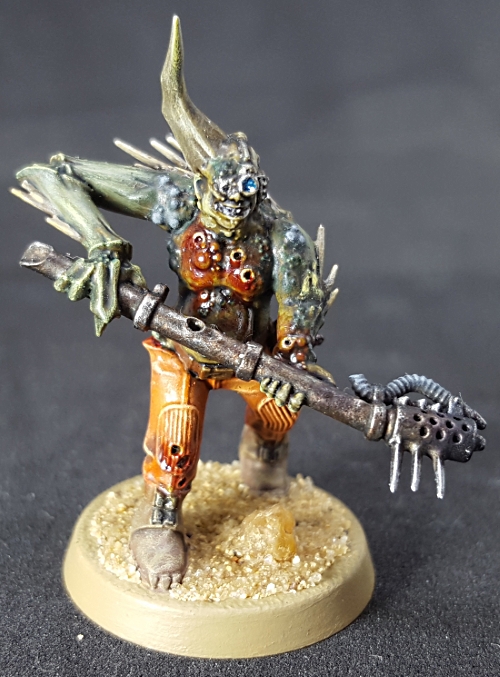 We continue the tradition of orange pants/green skin.

I decided this time to go with a weapon that is fairly “fresh” in that it was freshly yanked out of some hapless rhino or perhaps an unfortunate daemon engine’s pulsing maw.  (“Open wide and say, ‘Arrraghh!'”)

I finished off the spikes with a little bright silver because I envisioned that they were freshly driven through the flamer as an afterthought, right before the random plague-marine-in-charge-of-the-group-of-poxwalkers-in-the-yellow-and/or-orange-pants sent them wandering off in search of trouble.*

I originally went for black boils because I wanted this poxwalker to be a bit muted, not quite as polychromatic as some of the others.  But I found this didn’t show up very well (or at all) so I tried gradually lighter shades of gray until I was more or less satisfied with the results. 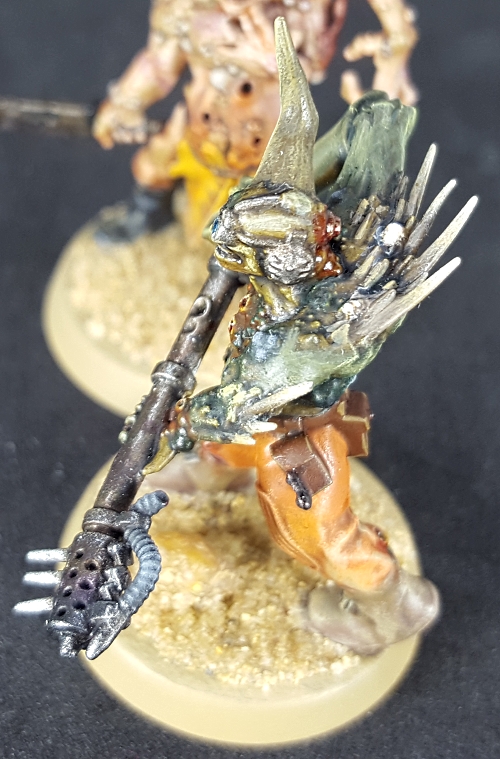 Tried a little subtle heat shading on the flamer.

Shiny Back sort of reminds me a bit of a tyranid with its chitinous right arm, and the spines makes me think of a kroot’s spiny crest.  I hope to get the yellow-and-red twin done this weekend.  I’ve made a good start so my chances of success are pretty high.  I’ve also done a little batch work on the remaining four poxwalkers with the idea of at least vaguely threatening success at completing the squad by the end of March.

I have also gotten a little more paint on one of the Blood Bowl rotters, and I dug out an old, metal miniature that I have had sitting around for a pretty long time now.  It was a bit box find at my local Santa Cruz game store, and originally came in the same Fantasy Lords box as this guy.

Apparently my unpainted white-primed worthy below left is/was Mxomycetes, Duke of the Mire, according to the good people at Grenadier Models.  Shouldn’t be too hard to knock out and if I am able to do so, then I’ll submit our royal friend for Azazel’s genderless/gender ambiguous portion of his March painting challenge.  It’ll mostly come down to when my game store gets a pot of Dechala Lilac into my hot little hands, so we’ll see. 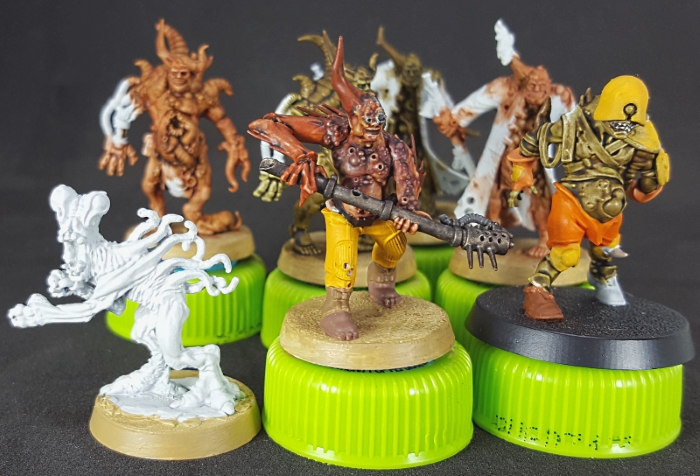 Still on the bench but all saying, “Put me in coach!”

I wanted to put Dave’s Blood Bowl dwarf pictures in this time and talk about the game we played, but when I downloaded the pictures from my camera and messed about with them, I found they had too many shadows and in general I didn’t like them.  We agreed to take some more the next time we got together.  So I’m not sure what the next post will bring, but with what I’m working on there is a good possibility it’ll involve more Death Guard fodder.  As for the dwarves they are currently on neglected-but-not-forgotten status. **

On a personal/non-Death Guard note, I started school this week and am working on a master’s degree in creative writing.  It is proving fun so far and I hope to learn a lot over the next couple of years.

*  I sent the pictures of Spiny Back to my friend, Dave, who said, “OK, so basically he has the vertical exhaust pipe from a Peterbuilt truck with spikes stuck through it.”  I like the way he thinks!  That is way more fun than saying it is “a flamer.”

** I also have a number of nature pictures, that I’ve taken in my travels, I’d like to post.  I’ve been saving them for when I’m busy with school and work and don’t have anything to post of my painting or games.

33 thoughts on “Spiny Back Poxwalker”