I finished up my poxbringer from the Start Collecting box for Azazel’s Jewel of July painting challenge.  The idea this time is to paint models that are sort of in the middle of the pecking order such as medics, lower level leaders, particularly swanky robots and so on.  They should stand out from the rank and file, but aren’t really mean to stand alone.

The poxbringer buffs other friendly Nurgle daemon units by making them a bit physically stronger, and he also fights directly with a rather vicious sword and by being a minor psyker.  He is no slouch in Age of Sigmar either.  So he seems like a great candidate for Jewel of July.

Why can’t nurglings ever take anything seriously?!

I added a new disease to my collection:  the dreaded Yellow Mold.  The poxbringer told me that this malady was originally brewed by an adept for use against some particularly troublesome feral orks, by mutating ork spores.  I told him that they just ripped off the idea from original Dungeons and Dragons.  He said that Nurgle’s Yellow Mold isn’t adversely affected by either intense light nor fire (though the carrier might be) and that besides, “Everyone knows that D&D is just a made up game as opposed to real life.” 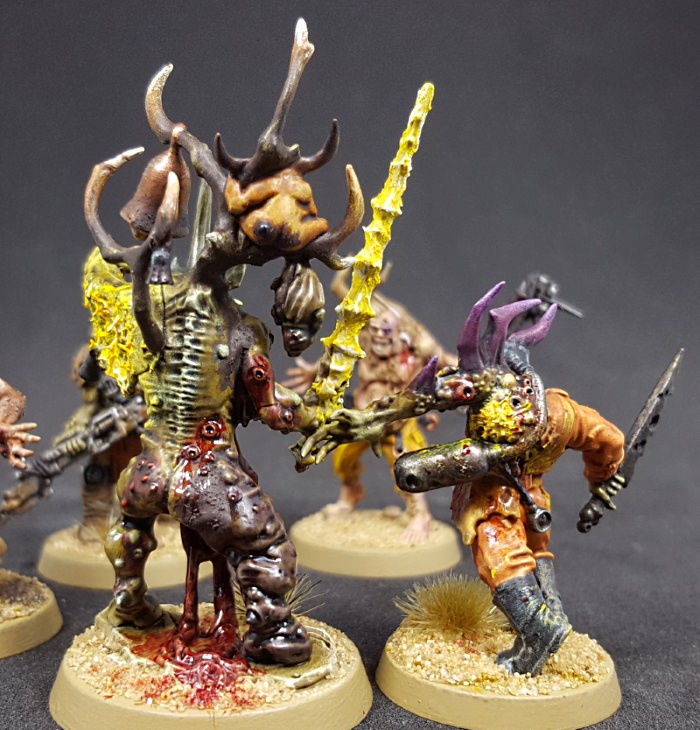 For my Yellow Mold, I liberally applied some acrylic texture fiber paste that I mixed with a bit Averland Sunset paint to the area in question.  I teased the mixture so it would dry with a sort of furry or spiky texture.  I drybrushed the area around the mold with sunset, and then did another light drybrush with white paint.  I sealed the whole thing with a matte varnish to protect the pasted area, since the miniature will be handled a fair bit.

I used the left over paste on his sword with the idea that our poxbringer coats his blade with the mold, and occasionally leaves a victim alive but wounded…. 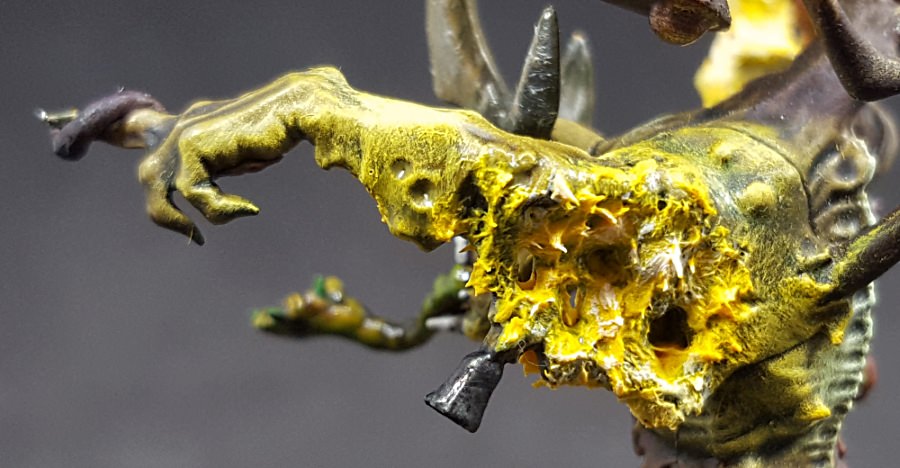 I’m rather pleased at how the texture came out on his arm.

The mold initially makes itself known by its characteristic diuretic effect.  After several weeks of raging thirst the host dies from dehydration.  Delightfully, drinking more fluids seems to intensify and hasten the process.  The mold then throws off contagious, airborne spores and dies.  In the case of nurgle daemons it simply reaches an non-contagious equilibrium much like what is shown here with our friend.

If our friend wants the mold to become contagious, he waters it for about a week then stops.  The mold will then throw spores and settle back into a sort of dormant state.  Alternately (and preferably) he can force feed a portion of it to a victim, release that person and let nature takes its merry course. 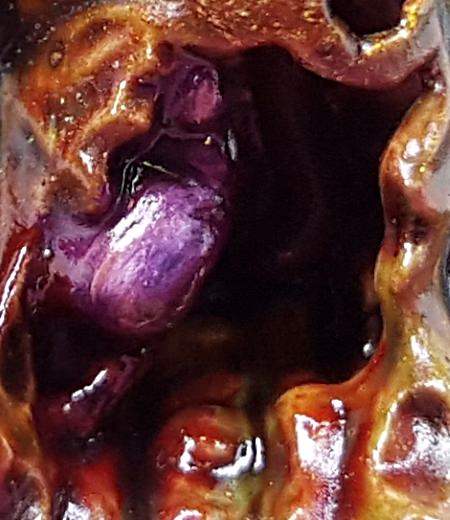 The purple bit is fairly subtle at tabletop distances, but it does a little variety to the usual bloody abdominal tableau.  The recipe came from the the very useful January 2018 White Dwarf.  I’m toying with the idea of testing it out as a flesh color on a daemonette, but we’ll see.

I put the suction palm-tentacle thing on his hand because I had a little extra green stuff left over from something else and I didn’t want to waste it.  Pretty much the same for the sword with the fiber paste mixure, as well as the fact that I had tried a couple of different things with the sword and still wasn’t satisfied.

So the first herald I painted, Urnafortunus, will more often than not receive a lateral transfer to the rank of spoilpox scrivener.  I like the scrivener’s powers but do not favor the official model.  It is nice enough but I’m not a fan of Nurgle daemons being accountants.  Such beings are meant to get their hands dirty.  Leave the paperwork to Tzeetch’s minions, who love such things, says I!

I’m continuing work on my poxwalkers and hope to have another to add to my growing mob for next time, along with a cultist who looks an awful lot like this guy.  Have been doing a lot of priming too and  hope to make a start on painting my trio of old school plague marines at some point soon.

25 thoughts on “A Two Eyed Poxbringer and the Yellow Mold”