I finished this guy some time ago and I thought he’d make a nice respite from the endless Nurgle stuff I’ve been posting over the last few months (and the months to come, I’m sure).  He sat around for a couple of years in the box and then had a shamefully long career as an Unpainted Slayer.  Like many of my models, the ones I use a lot are the ones that get moved to the top of the painting queue. + 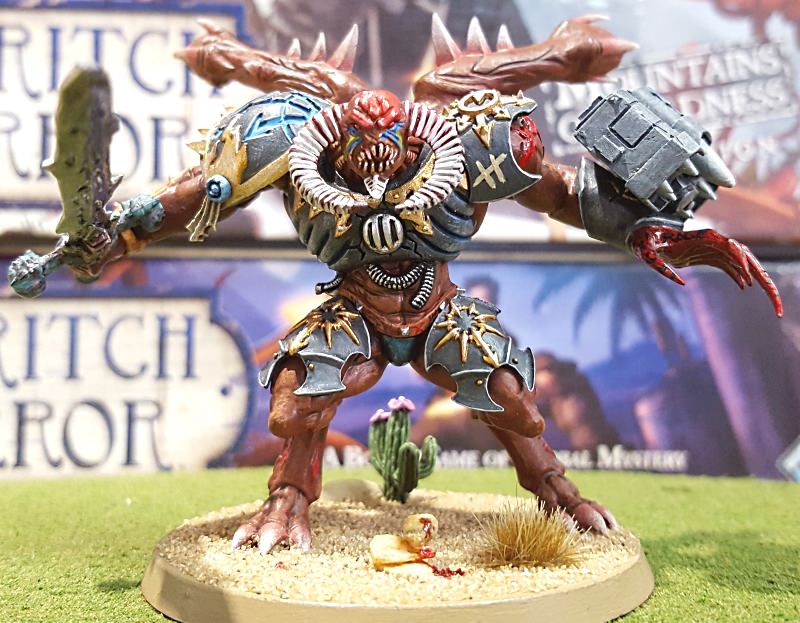 Note the purity seal; he’s certified 100% killy and quite buff too.

His highness has been my favored slave for many years and has led many a successful rampage, massacring hordes of enemy troops, hoofing it for linebreaker or legging it after hovering airplanes, directing his bloodletter minions in flipping over tanks, cleaving APC’s in twain with one mighty blow from his hellforged sword, and so on.  Truly, his catalog of feats is too storied to list in full here.  If anyone deserves to be a fully painted model, it is this fine fellow.  He truly is a prince among daemons! 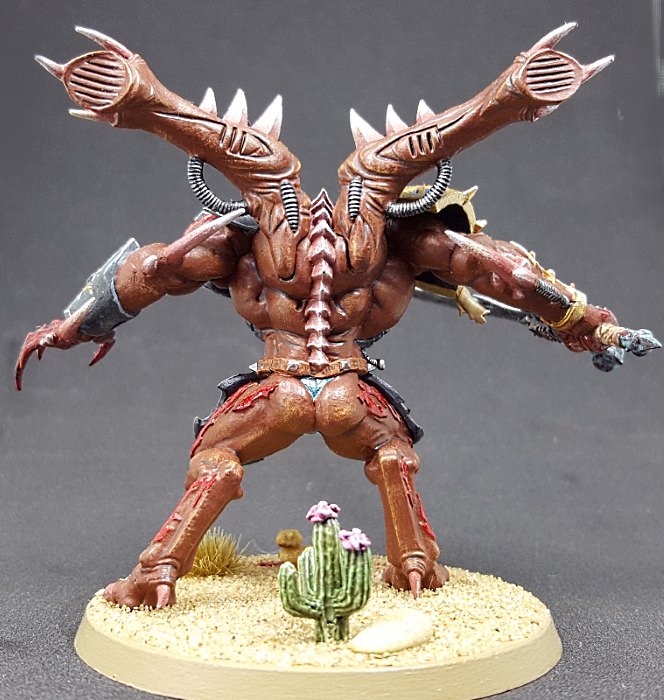 His tail ended up on a bloodthirster, but I think the teal tong is working for him.

I magnetized the stacks coming out of his back so I could give him some wings if I wanted.  So far, I have found in 8th edition that wings are not really that necessary for him to carry out my directives.  Mostly he has been the leader of my Khornate spearhead forces, coming in behind enemy lines while my other minions do their thing.

I did the flesh in the same way I did my bloodletters.  If I had painted him now I might do it a bit differently, using a layering technique instead of (or in addition to) drybrushing, but I’m not inclined to mess with Good Enough. 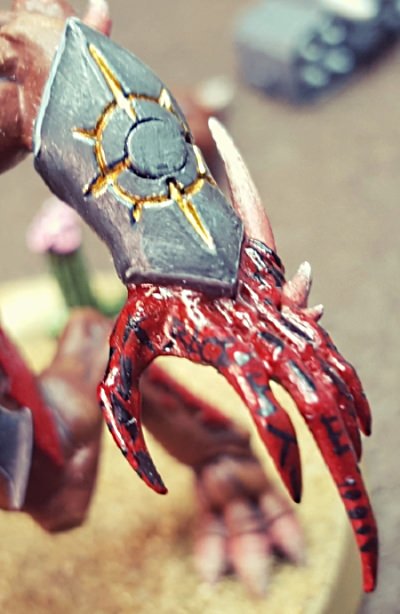 A magnet and a malefic talon.

I also put a magnet on his left vambrace where I can affix a cyclone missile launcher that he occasionally commandeers/steals from the Tentacles for the All Father guys and uses these days as a counts-as warp bolter though in previous editions it served as a counts-as relic flamer (presumably shooting warp missiles), or some other random weapon.

Since his claw is a pretty good weapon in is own right, I painted it a little different than the rest of his body and included some miscellaneous symbols and script.

Think that cross piece could use a little Brasso or something.

The sword, which has turned out to be a gruesome weapon indeed in 8th edition, was my first experiment with the (then) new (to me) Nihilakh Oxide.  As it has turned out I love that stuff. ++

I sometimes imagine the sword to be a trophy he pried out of the dead tentacles of a defeated Nurgle prince in one of the many Wars of Establishing the Pecking Order.  Being a Khorne daemon and thus having some sense of decorum and cleanliness … aka Burn It With Fire, I’m sure he occasionally gives it to his attending bloodletters and tells them something like, “It’ll be clean enough to eat off, you scum, or I’ll know the reason why.”  Nevertheless, some rust remains even after endless bloodletter tongue polishing.  There are limits; it is a Nurgle sword.  I think at the end of the day our prince figures if he doesn’t catch any too-lingering diseases from the thing, it’s a win.

I was able to scrounge some other daemon prince pieces and with the extras you get in the regular box I have a complete axe daemon ready to assemble.  It has been languishing in a sandwich baggie for a couple of years though. 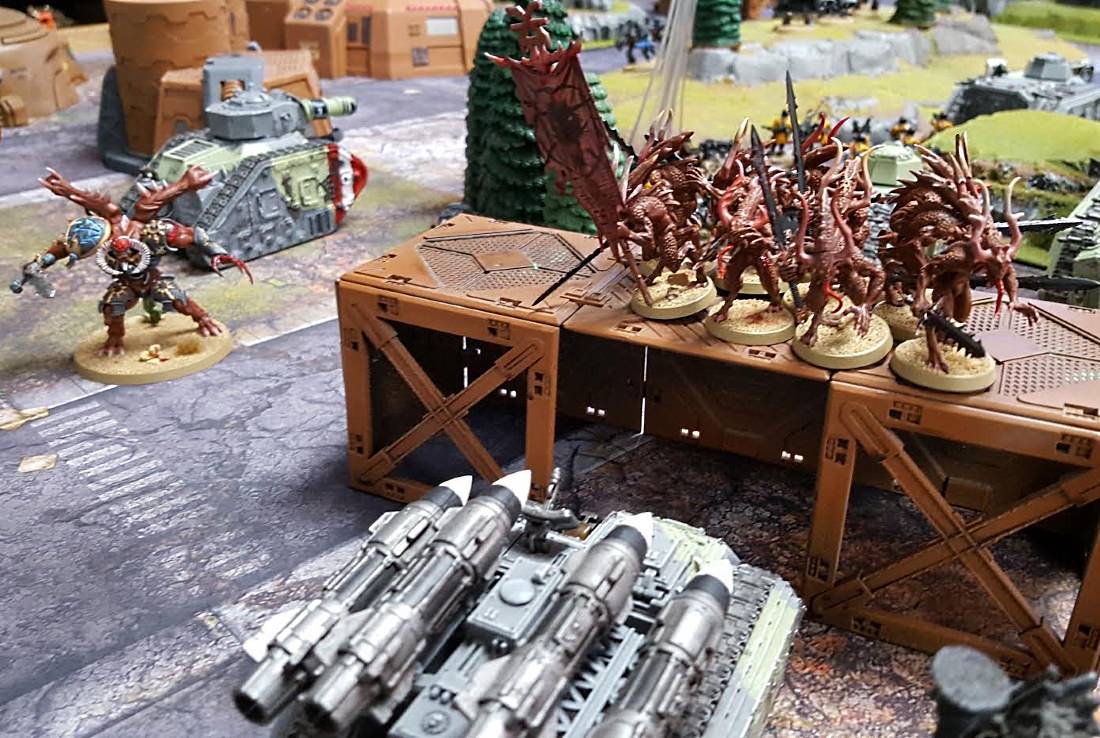 Deep Striking in 7th Ed:  “Guys, we were supposed to stick together!”

Further, a couple of months ago I picked up another new daemon prince kit when one of the game stores I play at was offering a 50% discount to get rid of some stuff.  So I’m thinking that eventually I’ll do a prince of Nurgle and probably one of Slaanesh.  I also have an old Fantasy Chimera kit, which I got at a huge (I forget how much) discount some years ago when another store was getting out of the Games Workshop business entirely.  That thing will probably be my Tzeentch prince, as well as possibly a Chimera.

Ambitious plans indeed.  In reality they’ll probably languish for some time yet while I work on current projects.  I do have the bad habit of collecting too much stuff I take forever getting to, but I try to balance that with the good habit of finishing the stuff I work on, though perhaps Becky the Bloater is a rare lapse from that good habit.

For next time I’m hoping to do either a battle report of our last game or perhaps some pictures of a couple of plaguebearers from the recent Cloud of Flies.

+  I used to subscribe to the ancient maxim of “If they ain’t painted they don’t go on the table.”  The problem I found with that was I’d buy new stuff and then by the time it saw play an edition or two would have passed and it’d be old stuff.  Now my maxim is “if I play with it a lot then I work on painting it.”  This is much more satisfying in that I get to play with new stuff and my forces still do get painted, at least eventually.

++ Common wisdom dictated the axe was a better choice in 8th edition, but that was before it was universally recognized that modifiers are applied after re-rolls.  Given the prince’s re-roll aura buff and that the various points costs have been changed to something reasonable, I think a case can be made for both weapons (or for neither!) and it comes down to individual preference, build, or in my case WYSIWYG considerations.

21 thoughts on “A Prince Among Daemons”