The Plaguebearer Express rolls on as I continue toward completing a mob by the end of the month for the Squadary Painting Challenge.  The current offerings represent numbers four and five of the requisite ten daemon squad.  My plan is to have two or three more done on Monday and then wrap things up with a group picture on the 28th. 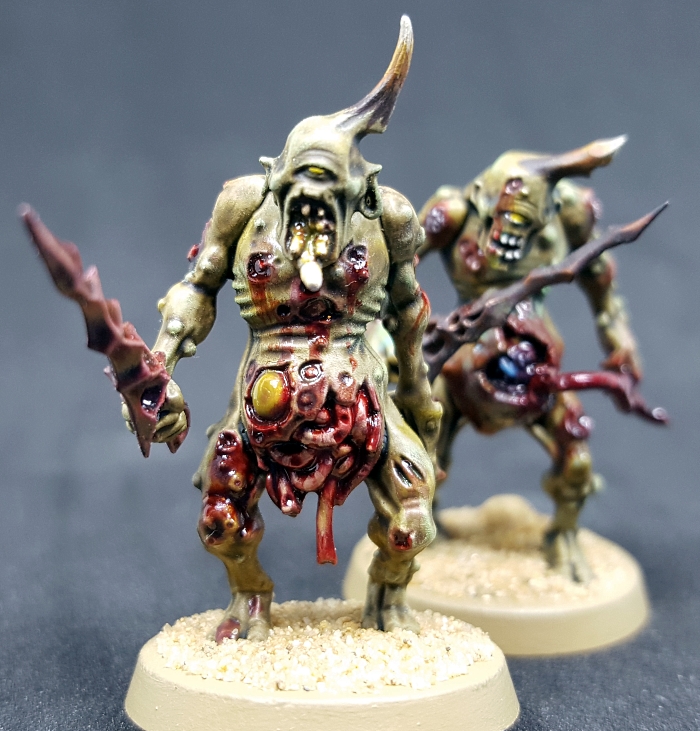 Maggotmouth here seems to be having a bad day for some reason.

Also, I am finished with the original ten daemons that aren’t part of this challenge but are part of my associated goal of bringing my painted numbers up to twenty by the end of the month.  I will include those miniatures in the aforementioned group shot and then do some individual posts in later weeks.

I originally decided to do something a little different with Maggotmouth’s sword and painted it the same as I did the flesh on my January cultist.  I wasn’t sure if I liked it or not, but for plaguebearers in general the weapon sort of just blended in with rest of the diseased mass of daemons.  Perhaps it might have been a better idea to try on a space marine?

So I started in with the various washes until I ended up with the sword you see above.  I like it better but I don’t remember exactly what I did.  I imagine it was mostly using Carroburg Crimson and Glossy Nuln Oil.  It still doesn’t stand out too much in a group, which is fine, but I do like it better now because it is more grist for the mill of my plaguebearers using swords that all a bit different while not distracting from the daemons themselves.  Know your role, as it were. 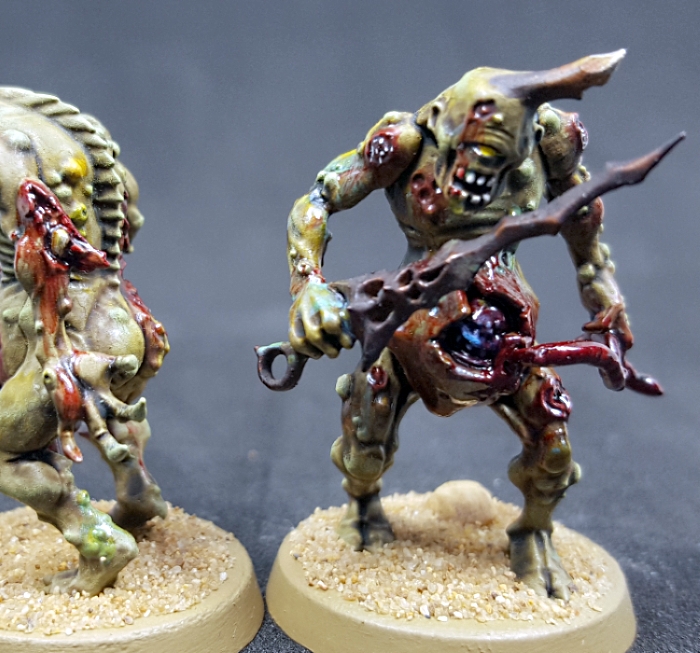 Not so MM’s partner(s).  “Every day in Real Space is a good day!” they chirp.

Plaguebearer Five’s (or Fifteen’s if you count the original ten) right arm is an extra from the plague drone kit.  Five and his running partner, Blue Belly, have a bit of a story to them.  I seemed to be in the middle of a spate of dropping miniatures when I was working on this guy.

So I’m in the middle of working on Five while I’m watching tv with my husband, as usual.  I let out with an expletive and my husband, not even looking over says, “Drop one again, huh?”  I look down and congratulate myself on my good luck.  The miniature landed perfectly, just as you see here with nary a scratch.  Then I looked a little closer…. 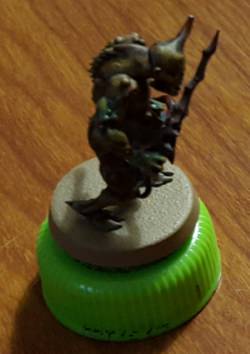 Five must have bounced off the top of his horn, done a one-eighty and then landed feet-first.  I fixed his horn by using my hobby knife as if I were putting a point back on a pencil.  I think it came out fine and I can only hope that anyone picking up my miniatures without permission chooses Five and gets stuck in the hand for their trouble!  Maybe if they are particularly lucky that day they’ll catch a dose of the Emerald Pox. 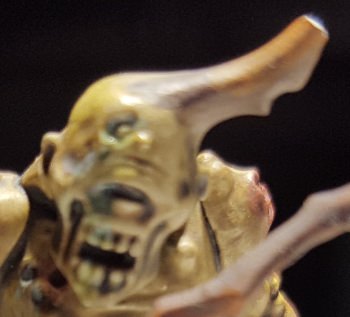 Maybe not so much.

I might do a weekend post if I have time.  I am almost finished with my single cultist for Azazel’s Complete a Neglected Model(s) challenge.  Just need to throw some sand on his base and let it dry.

I’m going to put a second neglected model into the queue and see if I can finish it before the end of the month.  Maybe another cultist since at my current rate of progress from when I finished the first guy to the second, I will have finished the entire twenty man squad by August 2022.  I think there is an outside possibility I can do better than that!

10 thoughts on “Maggotmouth and Friend”