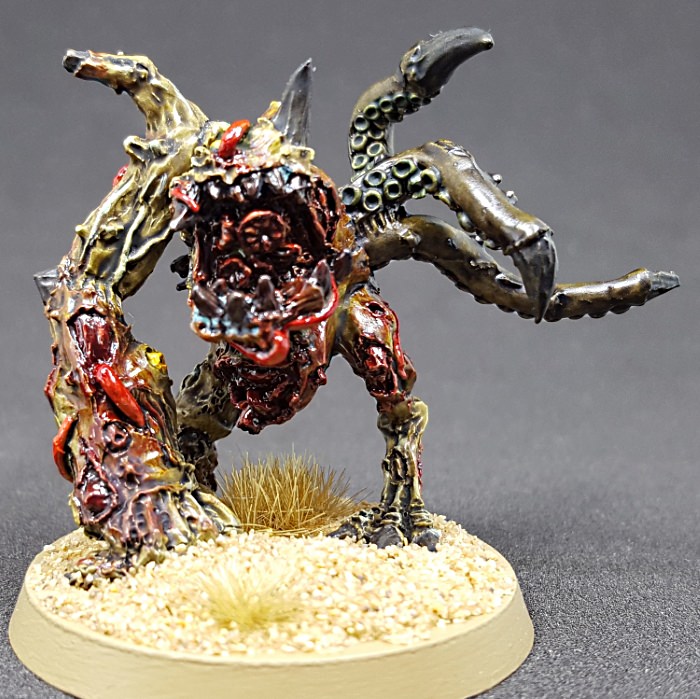 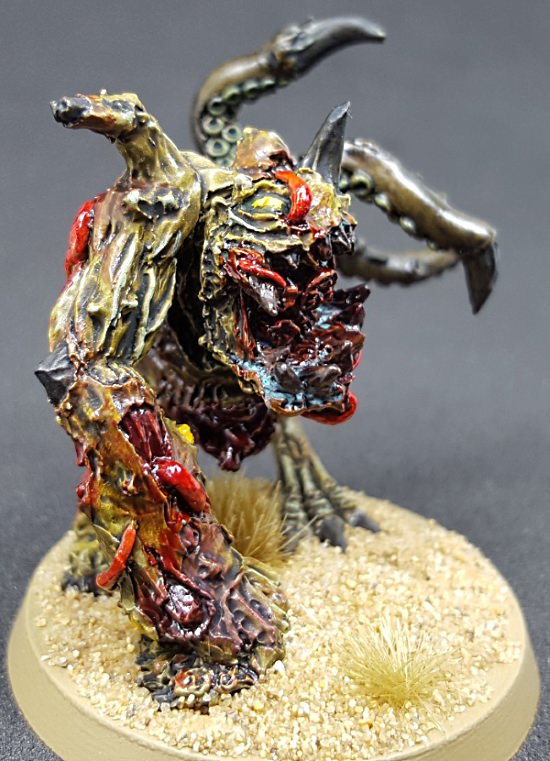 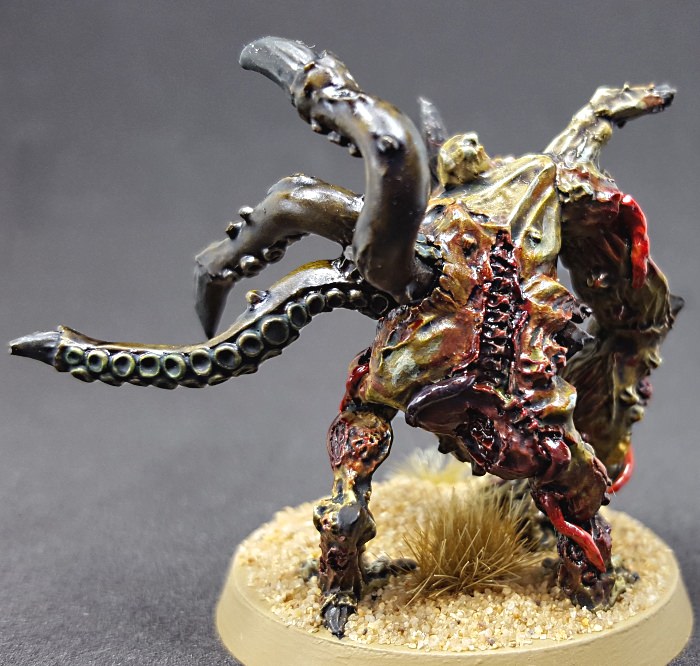 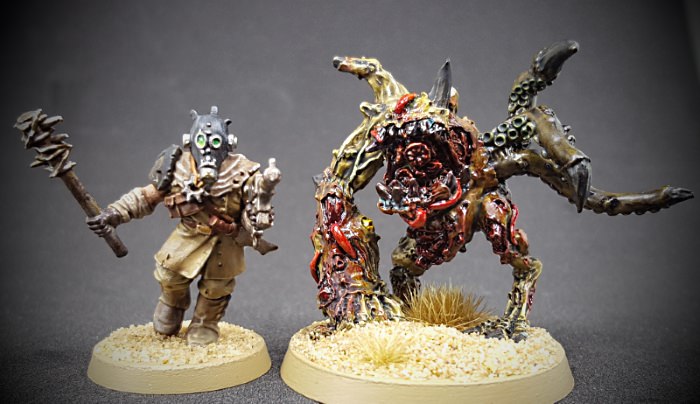 Enjoyed the current offering of Regimental Standard today. I might be in trouble though….

Could you be a mutant? While one of humanity’s great strengths is its biodiversity, there is a narrow line between useful adaptation and warp-tainted aberration. Constant vigilance is needed to keep the bodies of your regiment – both your own and those of your comrades – free of mutation.

Due to the increased workload on Mutation Inspectors, the Departmento Munitorum has ingeniously devised a mutation self-report system, allowing for your reassignment to a role that better suits any vile, abnormal talents you may have.

0 Points: While you possess a commendable level of purity, Guardsman, such unmolested genes suggest frequent shirking of front-line combat duty against the forces of Chaos. You have been assigned to the front of the next assault wave in order to rectify your deficiency of courage.

Between 1 and 9 Points: While your level of impurity is relatively minor, there is no guarantee… 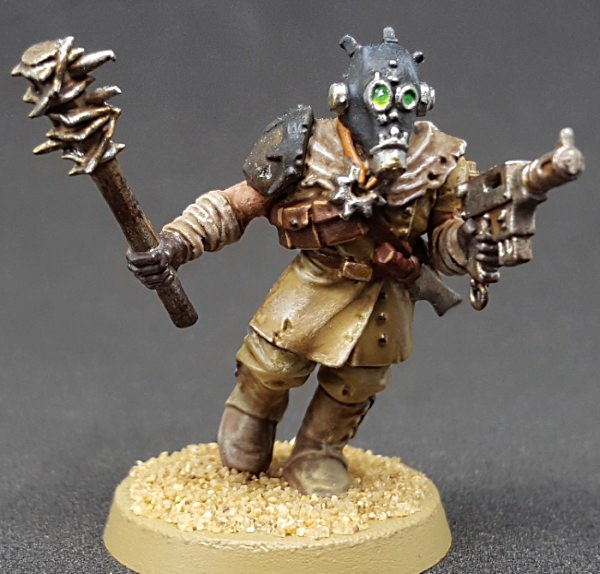 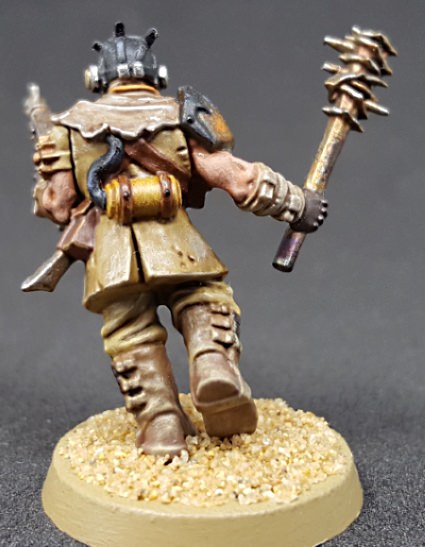 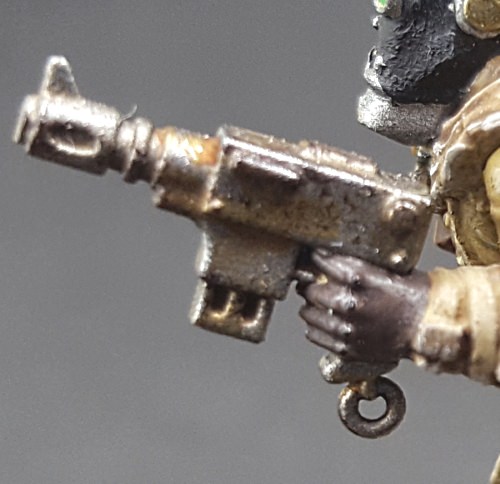 I’ve been working pretty diligently on Becky the Bloat Drone for Azazel’s Painting Challenge, which is due at the end of the month.  Here are a couple more quick paint table, work-in-progress shots of where things stand now.

I have the base colors pretty much done and have made a good start with washes as well.  I’m pleased so far, too, with the drool coming out of the mouth of one of the plaguespitters: a little experiment using Mod Podge. 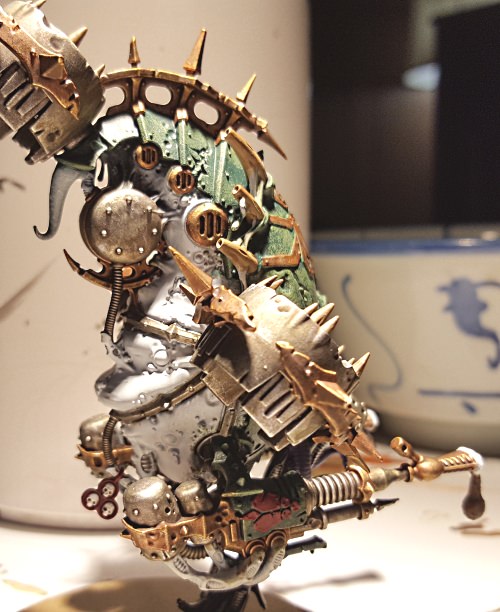 Once my bloater is done I will want to put up a list of colors I used and perhaps a few notes on how I did things.  This will definitely help the future me, if I decide I want to paint another one of these monstrosities.  So I’ll start my list here of what I’ve done up to this point.

So I’ve been making good progress on my bloat drone as my primary goal for completing Azazel’s Painting Decemb-uary Challenge by the end of January.  But hubris waxes eternal with us Eye of Terror types so I thought I’d add a few more things to the challenge.  If I succeed then I’m the Glorious Chaos Lady of Painting and all shall worship me and despair (to paraphrase another Chaos Lady) and in the unlikely event that I fail then I’ll cast all of the blame on my minions and/or vague tzeentchian machinations of conveniently shadowy, anti-painting entities. 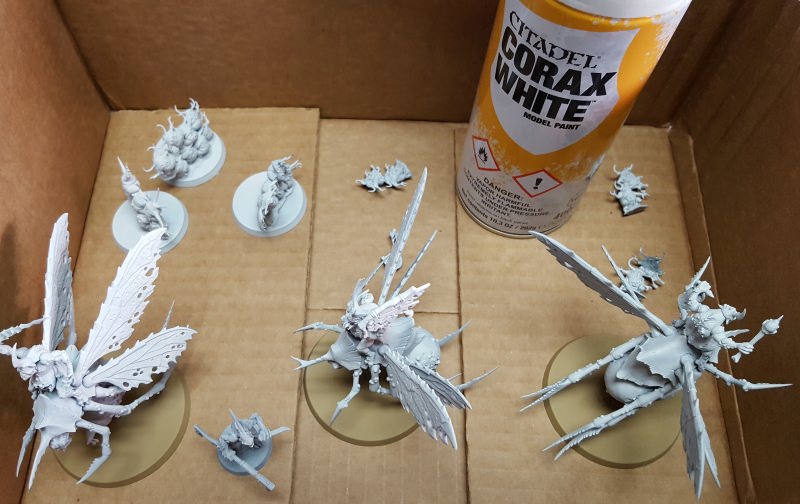 A unit of plague drones and some nurglings in the priming box.  I’m not sure why that kroot slipped in trying to pass himself off as a plaguebearer.  As for the nurglings my plan is to stretch the three bases they give you in the Start Collecting box into six bases by using some of the many individual nurgling bits that seem to spread in the old bit box like a disease the moment one decides to add a couple of Nurgle units to one’s forces. 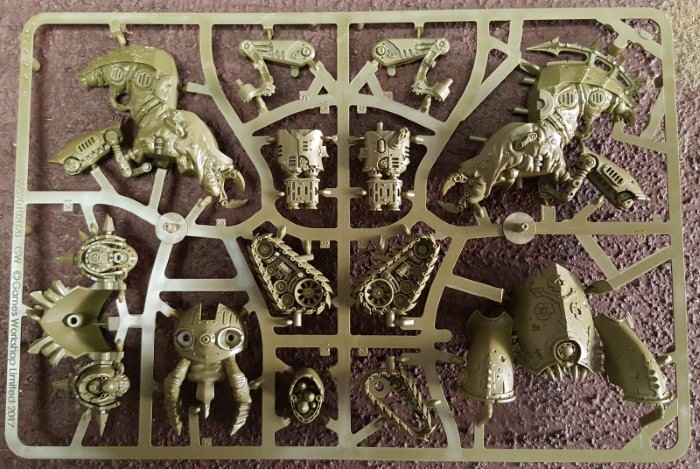 Got my snap fit Myphitic Blight-Hauler from the game store one day after I asked the owner to order it for me.  Now that’s service!  I put it together over the holiday.  The kit certainly did go together easily and I didn’t use any glue to see  how it would work out.  I was pleased with the results. 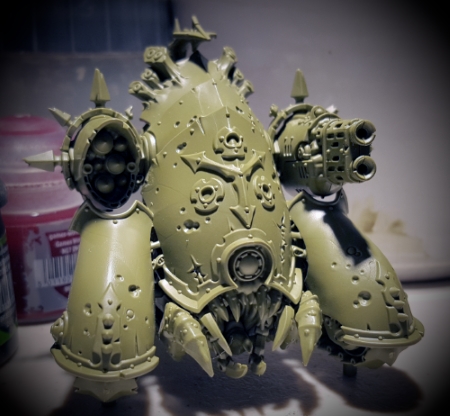 It is a simple kit but since blight haulers don’t have any equipment upgrades it is all good.  A missile launcher and multi-melta are just the sorts of things my forces need, actually.  For some reason my armies tend to deal with tanks and such by beating on them with swords.  This seems less effective this edition with the notable exception of my daemon prince of Khorne.  The shrouding the hauler provides accompanying infantry is welcome too. 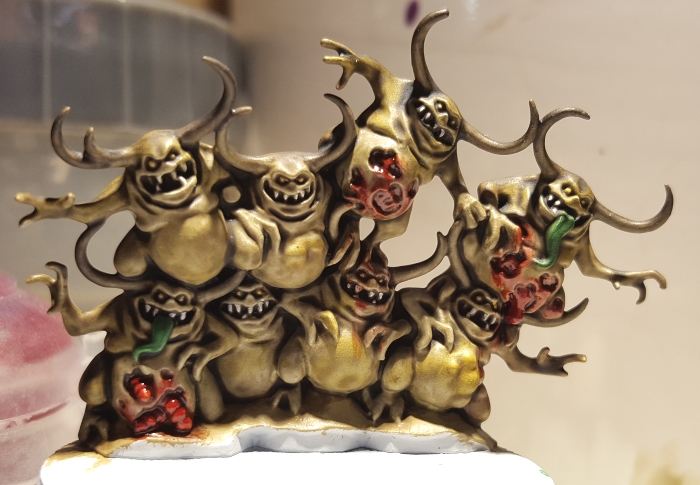 Unfortunately the conditions of Azazel’s challenge state that the models have to be no smaller than an Age of Sigmar hero or an ogre, so no mouthy, work-in-progress nurglings allowed!  Even if they try and make themselves look bigger by forming up into daemon pyramids and such like a bunch of Blood Bowl cheerleaders.  You really do have to keep these lesser daemon types on a short leash.