We played a 1500 point Orks versus Orks game where as it turned out my opponent’s warlord was the mega-warboss-with-the-lucky-stikk or MWLS for short.  We both ran a single Combined Arms Detachment.  My opponent convinced me to also include a Painmob formation since I had included the models for it.  Rather sporting, I must say.

The mission was Maelstrom War: Deadlock, which is the one where each player gets less cards with each passing turn.

What started out as a seemingly typical ork brawl between elements of Waaagh: Hungry and Waaagh: Derrius ended in something far different as we’ll see.

Early stages from the fight.  I like how the white lines neatly mark our deployment zones.

My forces got out to an early lead, taking key positions in an effort to break the tactical stalemate.  The other (bad) Orks countered by blunting a slow motion Charge of the Light Walkers up the center.  Still, Waaagh: Hungry built up a big lead that was going to be hard to beat, especially given the nature of our mission where each side relied on dwindling supplies.

My nobz attacked on the left flank and were stopped by an impossibly strong, giant ork in a strangely cobbled together suit of heavy mek armor.  He pretty much was able to take on all eleven nobz by himself and easily win.  What few survivors there were left had no choice but to run for it or die uselessly.  Our left flank crumbled.

Still, the situation was fast deteriorating and becoming desperate. 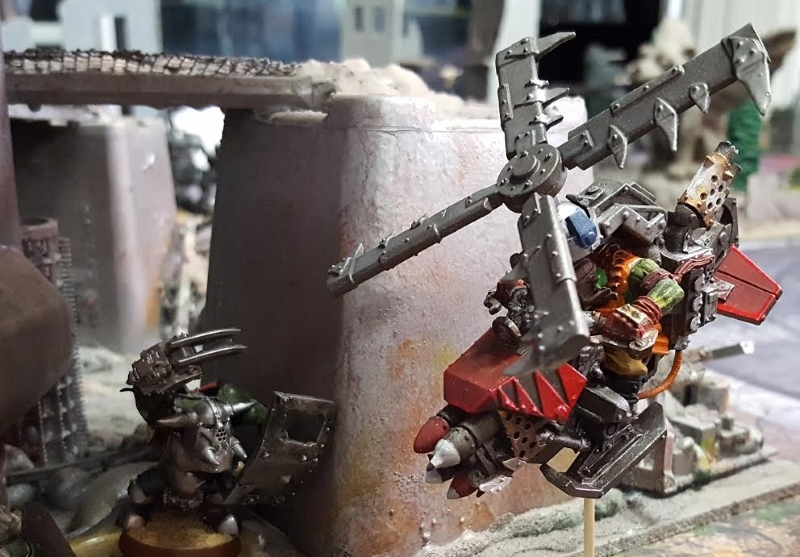 One sneaky git tries to ambush another.

With the enemy warboss rampaging toward our lines, someone had to do something.  No one was exactly volunteering to confront this seemingly invincible titan, so Lieutenant Scarbag Flashboy, the last survivor of his squad as usual, knew he had to act.

The situation was all confusion, smoke and screams.  Flashboy knew the most important thing at the moment was information.  He shrugged off his crippled rokkit pack and concentrated on remotely piloting a drone carrier ahead into the fiery chaos.  It was rigged with a camera and piled high with explosives. 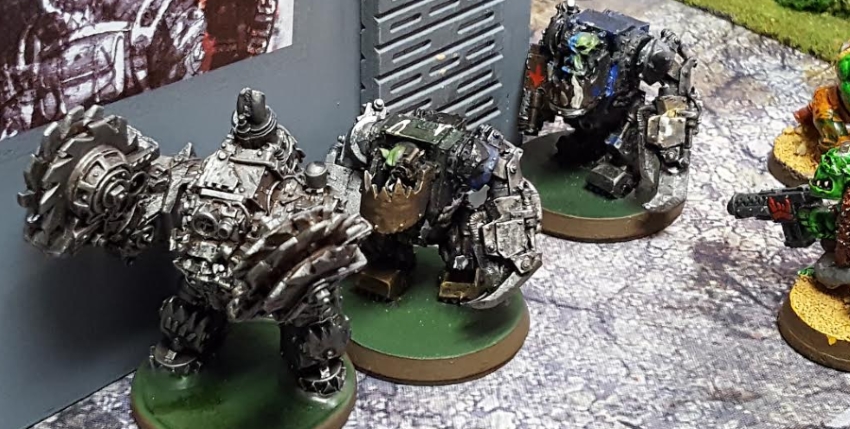 Cautious meganobz pick their way forward.  A feller could get hurt out there!

Flashboy was astounded by what he saw in his video screen from the drone’s vantage point.  The enemy warboss’s suit was obviously a cobbled together abomination of corrupted Tau technical genius and evil mek madness!

Pistons shrieked with each of the mega armored boss’s steps.  Shoota fire pattered against his armor like light hail.  Even direct artillery hits ricochetted harmlessly, though this did put paid to more than a few of his boyz, much to the behemoth’s amusement.  Even energy weapons fire was absorbed by a sparking electric field.  This only seemed to make him stronger. 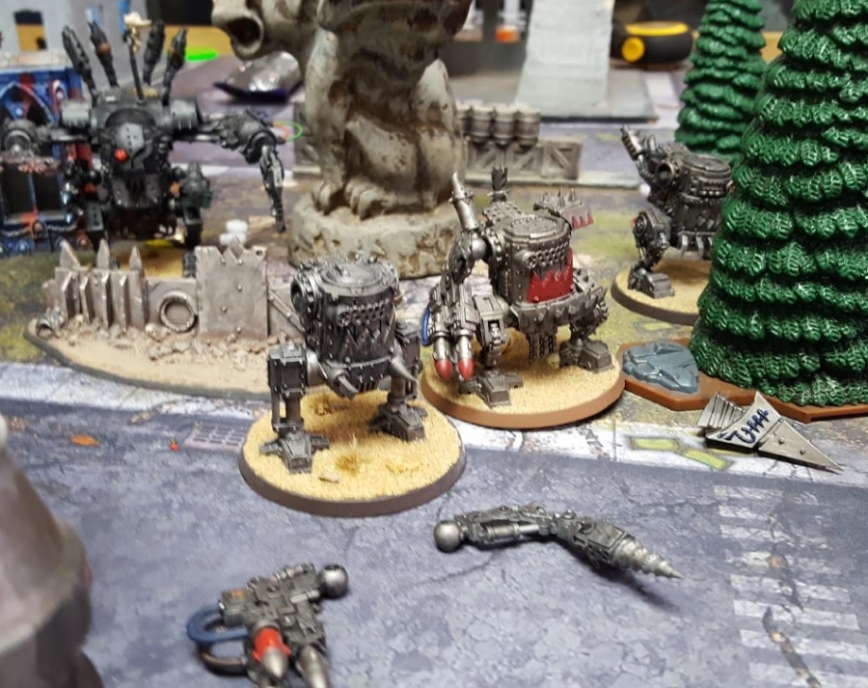 Flashgitz turn the center of the battlefield into a walker scrapyard.

The lieutenant tapped a few keys with a shaking head, sending a video capture to higher headquarters.  He’d done has much as he could for now.  It was time to look to his own precious lilly green hide.

To Flashboy’s horror he saw the warboss point a snapping power klaw at him.  Zog!  He had thought himself well concealed.  His drone was still on the move, though it was taking sporadic hits from cowering shoota boyz, as well as being rocked by friendly mortar fire coming from who knew where.  It’s left tread was damaged and looked in danger of coming apart at any moment.

He punched the drone’s Self Destruct on Impact button and sent it trundling directly at the warboss’s back.  It was a sort of slow motion race as the damaged probe struggled to catch up with its ungainly target.

Flashboy rolled out from the shell crater and hustled behind a friendly battlewagon-turned-pillbox, which had lost its front axle.  Its crew opened up on the advancing warboss.  Their chattering machine guns made a lot of noise but had little other effect. 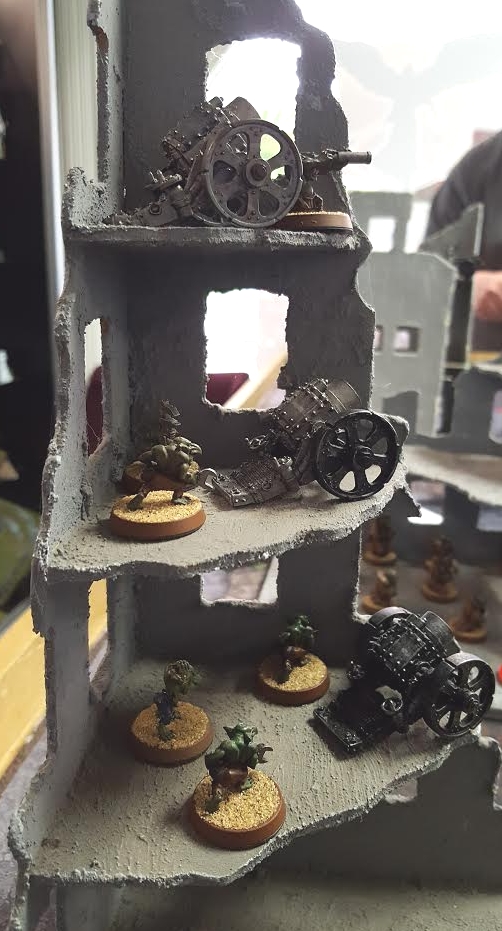 There was a massive explosion.  The boss had torn the battlewagon in half with his dizzying collection of power weapons, and some sort of short ranged plasma cutter array.  Predatory growls boomed from his vox caster.  Flashboy was thrown clear.  Dazed, he crawled under some of the burning wreckage.  Ammunition from the destroyed APC cooked off in the heat and flames.  Everything was obscured by thick smoke.  His titan opponent was surrounded by the gleaming nimbus of his force field.  Without this protection nothing could stand in the midst of this atomic wreckage and live.

The boss’s laughter stopped.  There was an explosion, even larger than the first, and screams.  Scarbag Flashboy had no idea what happened or how he later found himself in a ship’s medical bay, agreeing to give a painboy most of his teef to sew his legs and part of his left arm back on.  A young tau nurse shook her head and silently busied herself with the needless task of sterilizing a hacksaw.

Perhaps the drone had done its job after all?

Of the enemy warboss and his strange battle suit there was no sign.  Other than the lieutenant’s video capture, of course.  One thing was for sure, he knew that Warboss Hungry, as a close ally of the Greater Good and honorary Shas’O, would not stop until he solved the mystery of the mega mek armor. 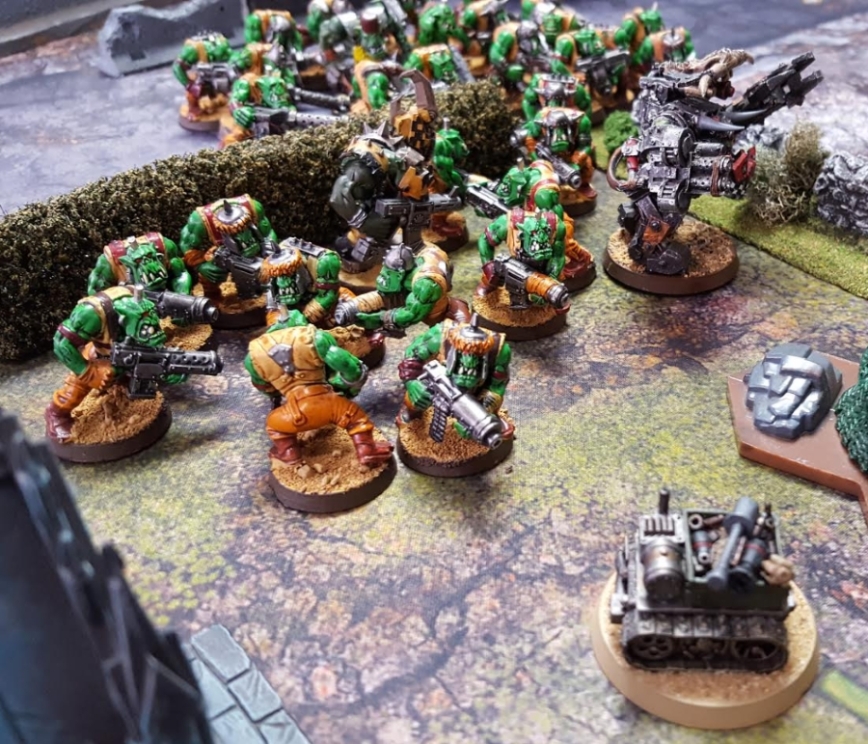 So the MWLS gave me an idea.  Why not take advantage of him unexpectedly turning up into a sort of four game narrative campaign of sorts instead of just a one shot deal?  I’ll put the campaign up in a future post and link it is this one, which will be the first game of the series.

It was a good fight and a close one.  A battle that definitely highlights the maxim of never giving up.  Especially with the Maelstrom missions.  Although my opponent rolled double 1’s with his lucky stikk and killed off his own warboss inches from my deployment zone, which was unquestionably the high point of our game,  he did manage to squeak out a 13-12 victory point win despite my achieving the all important First Blood in addition to the aforementioned seemingly insurmountable early  battle lead!

Still, thanks to the indomitable senior lieutenant, higher command is in possession of some very interesting intelligence.  One wonders what the Earth Caste will have to say about all of this?  As Warboss Hungry likes to say, “Wot’s all dis den?”