‘As a daemonic invasion gathers pace the presence of the daemonic creatures and the slaughter and anguish they cause can cause further Warp rifts to appear across the planet. ‘

This scenario is a modified version of the Chaos Daemon mission ‘Invasion’ from GW’s Battle Mission book.

Players: Ideally one player should play a daemon army or at least have daemon allies, but this is not required.  One player will be the ‘daemon player,’ even if she isn’t playing daemons.  The other player will be the ‘enemy player.’  If both sides are playing daemons, still use the rules for one side being the daemon player and the other the enemy player.

Board and Objectives:  There is a warp rift in the center of the board ideally about 12″ in diameter.  The rift should be a hefty piece of LOS blocking terrain.  Place four objectives halfway between each table edge and the warp rift, centered on each table edge.  The board will look something like this. 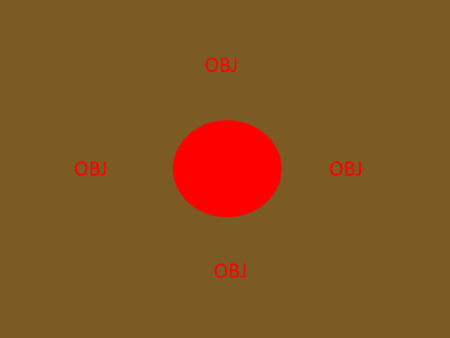 ‘We are at war with forces too terrible to comprehend.’

Warp Rift:  The rift is impassable terrain.  If a model from a unit deep strikes into the rift, the unit must roll on the deep strike mishap table. If a model otherwise somehow ends up with part of its base in the rift then it automatically dies with no saves or any other way it might have of staying alive such as Feels No Pain, etc.  This includes models normally able to be placed in impassable terrain such as jet pack units or zooming flyers, though such models can jump or fly over the rift so long as they do not end their move in it.

Neither player may purposefully place models in the rift, such as might otherwise happen with a “misplaced” result from deep striking.  The daemon player’s forces do not automatically die when deploying from the rift on turn one.

Deployment:  The enemy player deploys first anywhere on the table more than 12 inches from the warp rift.  He may put units in reserve in the usual ways and when they come in they can use their special rules or enter from any table edge.

The daemon player’s entire force starts in reserve.  Half of her units (rounded up or down as the daemon player wishes) enter play on turn one.  As many units as possible must be daemons.

On turn one, these models enter play.  Units compromised completely of daemons, though not including vehicles (unless the vehicle has the Daemon special rule) may either deep strike or enter play through the warp rift treating the edge of the rift as a table edge.

If the daemon player has any remaining units required to enter play on turn one, then she must pick a single board edge from which to enter play.  It can be any table edge, other than the warp rift, but all of her units must enter on turn one from that same table edge.

Further forces from either army entering play after turn one can enter from any table edge or by using their special rules.  No model can enter play from the warp rift after turn one. No special rules of any kind will allow more than half (rounded up or down) of the daemon player’s units to enter the game on turn one.

First Turn:  The daemon player takes the first turn.  There is no Seize the Initiative rule in this scenario.

Falling Back:  All forces fall back toward the nearest table edge.  In the unusual event that any daemons from either side fall back, they do so toward the warp rift.

Victory Conditions:  Each objective is worth one point.  Whoever has the most points at the end of the game wins.  If the daemon player controls all of the objectives at the end of the game, she has achieved a total victory as daemons spill forth and drowns the region in hate and death!  If the non-daemon player ends controlling all of the objectives, likewise, he wins a total victory by crushing the nefarious attempts of the Ruinous Power’s powerful servants and bringing peace to the sector for a millennia.

IG vs. Khorne Daemonkin (1850 Points, March 2017): A tough battle with impossibly brave zealot psykers and synchronized bloodletter summoning.  It probably isn’t a good sign that the Imperial commander’s secret report ended that the ‘last transmissions [from the planet] degenerated into gunfire and maddening screams.’