Senior Lieutenant Scarbag Flashboy was given the mission of helping by dropping his stormboyz into the front lines and attacking heavy support targets of opportunity in one of the many battles in the Santa Cruz Sector against the Imperium.  In the target rich environment of a general Imperial Guard advance, the target in question turned out to be a manticore.

Everything went according to plan.  Their air assault went perfectly.  Actually it was 11 inches off target and another half inch would have dropped the entire squad into no man’s land, but it all worked out so that is what counts. 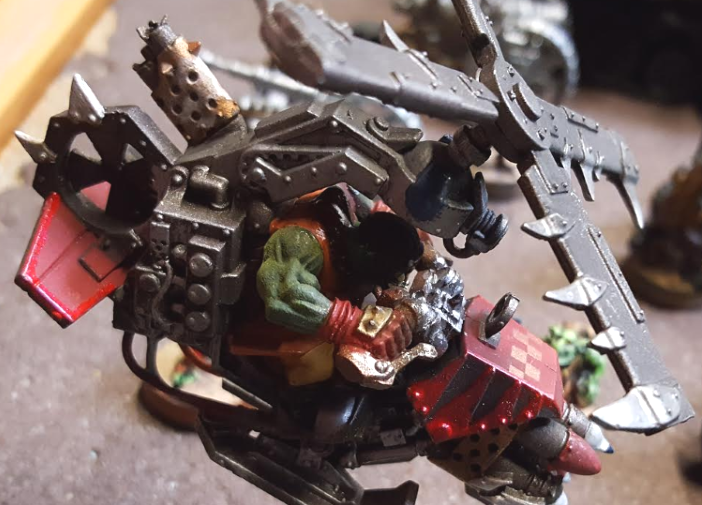 Death and rude gestures from above courtesy of the semi-mysterious Red Git!

The manticore blissfully continued to fire its gigantic storm eagle missiles at distant ork units as the stormboyz prepared for their attack.  Bundles of grenades were checked, rokkit packs dialed to full throttle red line, and Scarboy himself produced a steel bar to jam into the tank’s track.

A few guardmen ran in their general direction but they were apparently retreating from general ork mayhem and soon disappeared in the fire and smoke.

Suddenly a deffkopta roared overhead in a red streak, spewing oil, gears, and stikbombs in its wake.  The ground vibrated under the stormboyz’ feet.  As they stood watching aghast, their now useless weapons falling from their hands, the deffkopta pilot corkscrewed a pair of rokkits into the missile tank.  The remaining two storm eagles detonated in a hellish fireball.  All that was left of the manticore was a burning crater.

Naturally Lieutenant Scarboy found himself stand alone, dumbfounded and patting out flames on his uniform, with all of his boyz laying dead around him.  Those who hadn’t been vaporized of course. 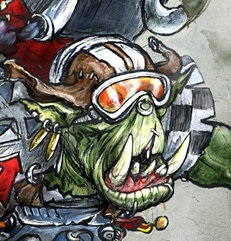 The distinct red deffkopta flew back and hovered over Scarboy.  It was shedding even more parts than before after being damaged in the explosion. Clearly the only thing keeping the increasingly grotesque machine in the air was the pilot’s invincible belief in his own airmanship.

‘You! Ya you, da stoopid grot dat be on fire. Zog off an’ die, mate, cause I’m da bestestz an’ I’m da fastestz too!  ‘Cause I’m da Red Git!’ the pilot screamed.

‘Wot?’ The stormboy looked up.

The pilot replied with a rude gesture and tossed a ticking melta bomb at Scarbag’s feet.  He zoomed off cackling into the sunset.

Lieutenant Flashboy became introspective as the ebb of battle drifted away from him.  He woke up when the melta bomb laying in a nearby puddle of mud and fuel misfired with a depressing fizzle rather than the usual white hot boom of coruscating light.  The ork sighed and kicked some muck onto his now smoldering boots.

A universal drone trundled up to him on squeaking treads.  Waaagh! Hungry has always made good use of the ubiquitous drones as ammo carriers, mobile bombs, soldiers (remote-controlled or sporting a primitive AI), and especially for recon.

A tinny voice come from a crackling speaker on top of the drone.  “My name iz Big Mek Fixxit an’ we need ta talk if yer lookin’ fer revenge.”

‘Revenge?’ Flashboy asked.  The drone had his full attention.

7 thoughts on “Scarbag’s Saga: Curse of the Red Git!”