I recently finished another mouse miniature from my stocks of Netherworld’s Edge miniatures I purchased back at a gaming convention in 2015.  The background is a Doctor Seuss-like forest my friend’s daughter made and was kind enough to gift me with.  Seems an appropriate setting for a party of mouse adventurers. 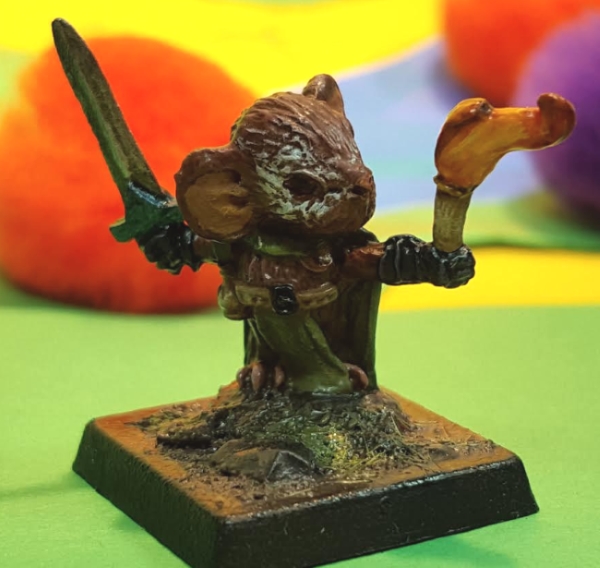 Boldly leading the way with sword and torch!

I thought the bases on the other three miniatures could have used a little more color to contrast the brown, so on this new guy I added a little bright green as well as a rock I picked out of my shoe at the gym.

The photo makes my newest mouse appear a bit more glossy than he is in person.  As usual with metal miniatures I plan on using for gaming I brushed on one coat of glossy varnish and two matte coats.  While I do like how they look (especially the bases) without the varnish, I have found it necessary to protect my metal miniatures after some hard-won experience with my metal, gretchin artillerists.

Posing with three other mice I painted some time ago.

These miniatures were originally produced for the Netherworld’s Edge game, and I bought them from Zombiemsith at Dundracon 2015 in San Ramon, California.  So far I have only used them in as artillery mice in Warhammer 40K.  For opponents who won’t have the verisimilitude of the game disrupted by substituting mice for goblins, they are about the same size and they do offer the advantage that my opponent won’t get my artillery goblins confused with the one or two squads of goblin infantry I often include in such games.

6 thoughts on “Four Not So Blind Mice”