Like many people, I imagine, I’ve been working on some daemonkin.  I’m a fairly deliberate (slow) painter so this edition they’ll probably be used as allies.  Troops seem a good starting point for an army collection so I began with some bloodletters. 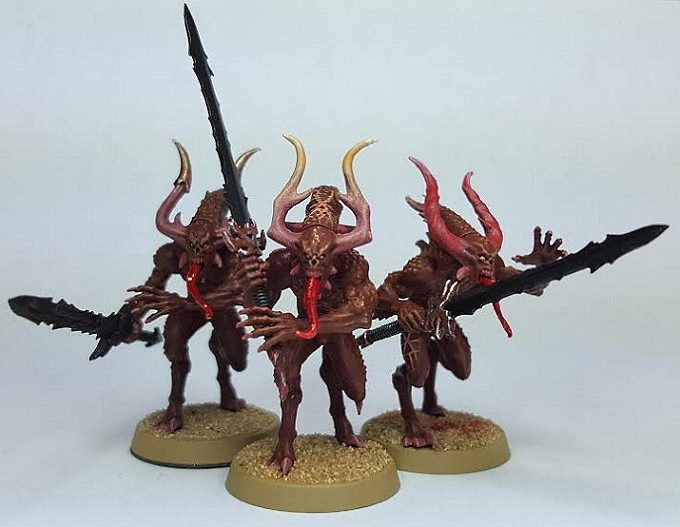 A triumvirate chosen pretty much at random as befits Chaos Daemons.

I messed around with various schemes for their horns and blades and for the latter opted for a plain look, for which I used Vallejo’s glossy black paint.  I experimented with blade highlights, but in the end decided I liked them best just black with a bit of shine.  The primer didn’t quite look right in a couple of small sections on some their swords, but I was able to camouflage this pretty well, I think, with Blood for the Blood God technical paint.  (I love that stuff!)

Here are two more — the bloodreaper upgrade character for the unit and a daemon with an instrument of chaos.  I found that I liked using gloss lacquer on their tongues, so I went back over the models I had already completed and added that detail.

The World War Two Soviet infantryman is a 28mm metal Warlord Games piece.  I included him for scale and because I finished him not too long ago.  Playing with the miniatures, one forgets sometimes how big some of these monsters would really be until you put them beside a miniature of an average-sized man and use a bit of imagination.  Heck, the horn is larger than poor Pyotr here! 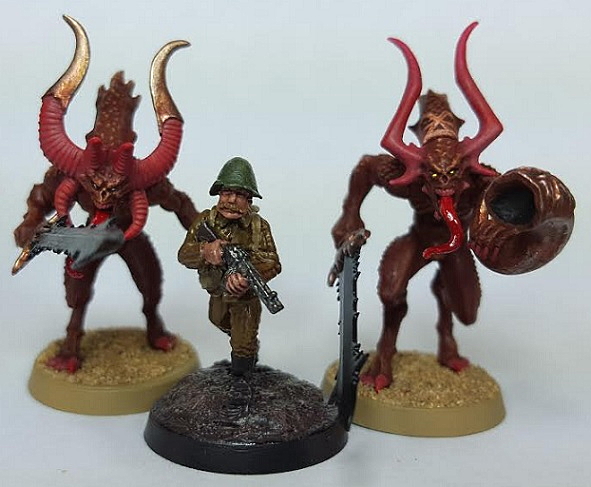 Two more with their best bud, Pyotr, from the Alternate Dimensional Soviet Union.

So far I have nine bloodletters finished, which means to complete the box and the unit I only need to finish one more with a banner.  When I run them as a unit of daemonkin bloodletters I’ll probably keep them cheap and use a minimum squad of eight without upgrades.  So in that sense they are done now.  However both in Codex: Khorne Daemonkin and the base rules referring to chaos daemons, one can take some of the possible upgrades for free when a unit is summoned, assuming you have the models on hand.  So I thought I’d make sure I did. 🙂

The pack thus far excluding the two taking the selfie with Pyotr.

My next daemon project after getting the Banner of Blood done will probably be a resin Herald of Khorne I have for a cheap HQ. I could just as easily use the bloodreaper that is posing with Private Pyotr as a herald.  Since I have the herald model though, I might as well paint him.

I had a chance last night to play my small but painted Khorne force as an allied detachment and they did pretty well.  I considered waiting until August 8th (a very auspicious date for the Blood God!) but more than three weeks is far too long to keep the dog-headed god waiting for his tally of skulls. 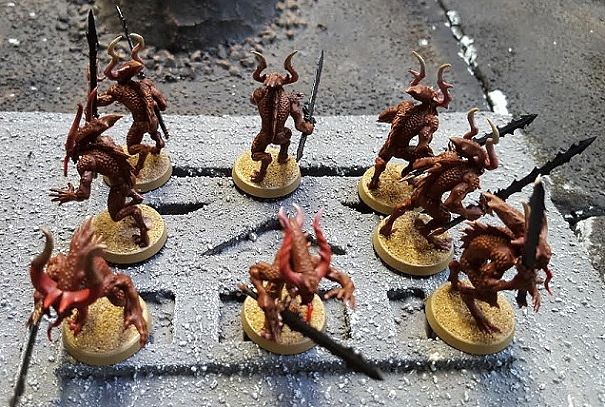 What better place to materialize?  Let the tally of blood points begin!

They deep struck into the battle with pinpoint accuracy right in the middle of a Shrine to Khorne, but then you’d expect nothing less would you?  The daemons spread out, seeking victims only to be greeted by a withering barrage of tank and autocannon fire.  Only the herald survived and him with one arm.  He clamored up a short plateau, coming to grips with the Guard heavy weapon team. His preternatural reflexes did him little good though what with the rough terrain and the claymore-style mine booby traps, rock falls, and one particularly vicious guardsman with a serrated knife. Still, it was alright because of course “Khorne cares not from whence the blood flows so long as it flows.”