We made the drive up from Santa Cruz to Sacramento on Sunday to participate as “The Space Communists” in the Twin Linked Tournament, which is basically a doubles format where each player fields 1000 points.  My team partner, Mark, played Tau and I played Orks.  His was a rather eclectic group of blueskins, featuring a little bit of everything and almost none of what people expect, i.e. no riptide, plasma/melta spam etc.  Even his fire warriors were armed with pulse cabines instead of the usual rifles.  The greenskins were pretty standard, three trucks full of boyz, a battlewagon commandeered by the warboss with his nob retinue.  The grots managed to drag three lobbas to the edge of each battle.  They entrenched themselves wherever they could find a good spot to hide so they could be left in peace to mortar both sides indiscriminately.

Game one featured a drop pod army of Ultramarines led by Tigurius allied with Space Wolves.  All I can say about this is that we had two Great Moments early in the game.  First, Longstrike managed to one shot kill their Sicaran battle tank on turn one.  Second, my nobz handily defeated an advancing squad of terminators.

The Tau made some good shots and all of my orks managed to get into close combat.  But the ork boyz couldn’t really shift the advancing grey hunters and it didn’t help that Tigurius was able to keep his squad invisible for the entire battle.  Theirs was a very powerful army and we never really had much of a chance.  We held on until (I think) turn five and were tabled.  The only survivors of the orks were the gretchin mortar team, who legged it because Tigurius frightened them with his scary magic and outrageously long horns.  I believe this team ended up either winning the tournament or taking a close second place.

Even though we got tabled we still had fun.  I certainly got a few list building ideas for the Space Wolves I’m painting, and I’m definitely going to try for Invisibility when I play a psyker who can roll on the Telepathy table.  That is one mean spell!. 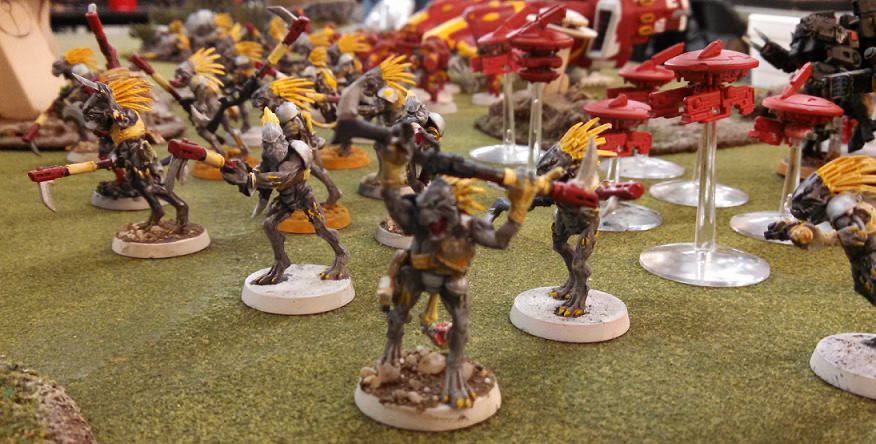 Game Two was against another drop pod-heavy army.  This time Salamanders and Dark Angels.  Unlike the first scenario, this was a hard fought game from beginning to end.  The marines were able to come in and do a lot of damage with their flame throwers and other weapons, but not being particularly good in assault we were able to deal with them fairly well once we weathered their initial fire.  Unfortunately they were able to deal with his fairly well too with their dakka.

They had another Sicaran battle tank and again Longstrike blew it up before the beakies knew what they were about.  For the Greater Good!

There was a lot of end-game maneuvering with each side trying to score points by taking table quarters.  The main thing that kept us in this game was the Tau commander.  He sat on one of the objectives and scored points each turn while the orks fought off multiple attempts by the marines to drive him away.  Besides the points, it was a skyfire objective and the enemy feared for their Fire Raptor Gunship.  They didn’t really need to.  Worry more about the nob hiding a power claw up his commissar’s great coat when you go into hover mode!  All of Mark’s crisis suit bodyguards nobly gave their lives but between their firepower and wall of greenskins he was able to score five of the eleven points we accumulated during the game.

When the smoke cleared and the accountants worked their magic, it was an 11-11 tie.  We shook hands and everyone was all smiles.  A great game!

Game Three was against Grey Knights and Orks.  The main unit of the ork army that interested me was a squad of 30 ‘ard boyz led by Mad Doc Grotsnik.  Heavy armor, Feels No Pain, and Fearless made them hard to shift while Rampage made them potentially even more dangerous in close combat.

We were able to kill this unit though it wasn’t easy.  My mortars took their bloody due as Grotsnik’s boys advanced and the kroot took them under fire from their woodland fighting positions on our right flank.  I ended up engaging them with all three units of boyz as well as my nobz, though one unit had to charge sans their trukk.  Dang those Grey Knight back shooters!  Although the combat only lasted for our turn my hands were tired after finishing dicing it out.  I don’t think I would have won without using all four of my squads, as well as thinning them out beforehand with a little help from the kroot.  When the dust settled Grotsnik and his charges were all dead.

The Grey Knights consisted of two large squads of terminators and they did good work in our backfield, though the main battle happened mostly in the center of the board.

This time there was no Sicaran for Longstrike to kill and he ended up dueling a battle wagon full of lootas to a draw for four turns.  Finally some deffkoptas came in out of nowhere and put an end to mighty Longstrike’s reign of terror.  Then my warboss called a Waaagh!, charged about twenty inches with his remaining nobz and blew up our opponent’s battlewagon, taking out about half the lootas as well as all of his own squad and almost himself in the bargain.  Ignominiously he was finished off by some gretchin, who spend most of the battle hiding in reserves only to come in at the last moment to lord it over my warboss!

Another hard-fought game, but as the Grey Knight player pointed out, being a kill point mission this was a tough one for us to win.  The Grey Knight player only had three kill points in his entire force whereas I had four points just in my vehicles alone, and that was what the game came down to.  We were pretty even in terms of scoring points for board control and other things but they were able to score points killing my trukks with easy psycannon shots.  I think they got the fire warrior’s devilfish as well.

Still, I had a rare victory of sorts in that all three of my boyz squads managed to survive the game in one form or another, including one squad of shoota boyz that kited one of the terminator squads for most of them game sniping at them.  “How come you don’t just charge me?” he asked.  “Boss sez use taktics an’ stuff,” my nob yelled back.  In reality they just didn’t want to get within chopping distance of those halberds. 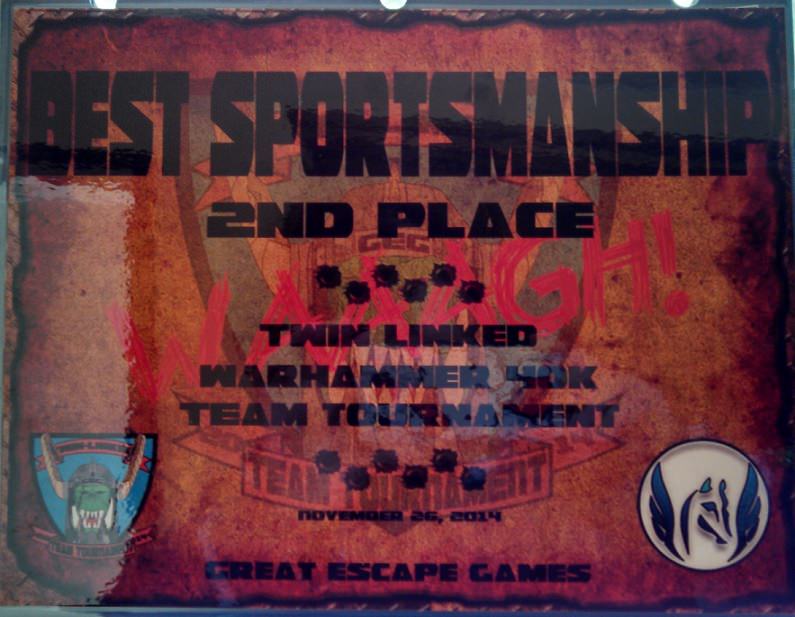 Mark and I were fortunate enough to be voted second place winners in the sportsmanship category, which was fun.  We are hoping to play in the next tournament in December.  Thank you to all of our opponents for fun games, and to the TO Mark Broughton.  Also thank you to Great Escape Games in Sacramento for hosting and the fancy tournament discount.  I was able to score a cheap Space Wolf dreadnought for my collection!