I finished painting the first four boyz of what will be another trukk squad of twelve orks.  I assembled them mostly from Kromlech bits.  I used Kromlech’s armored torsos and mixed in some heads with helmets from Spellcrow because I might occasionally field them as 4+ armor save ‘ard boyz for friendly games.  The idea is they think of themselves as an elite unit and we know that when orks believe something it often can come true. 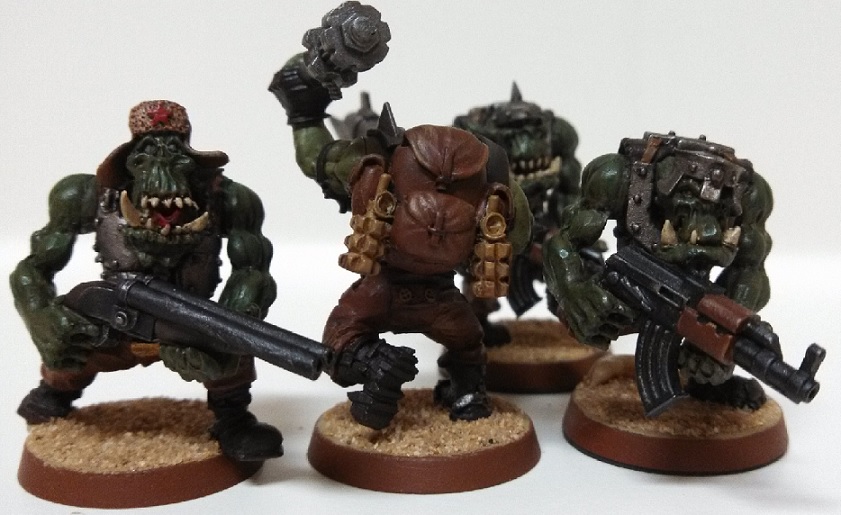 I forget where I bought the guns, which is unfortunate because properly ork-scaled Soviet weaponry isn’t that easy to find.  Fortunately I bought enough to complete the squad and then some in case I want to expand them to a battlewagon unit.

The arms were also from Spellcrow.  They are noticeably larger than standard GW ork arms, though not too big, I think in keeping with their air of superiority or perhaps delusions of grandeur.  Maybe they spend a lot of time in-between battles doing curls and push-up’s with their hands close together?

I’m using a mix of Kromlech ‘running legs’ and standard GW ones.  I like the dynamic look the running legs give the squad versus the standard legs, which make the boyz look like they are standing around.

I magnetized the big shoota arm on the ork with the gas mask in case I want to use him as a mek in the future.  I also put a Kromlech backpack on him, so he would look different than the other meks I’ve modeled using GW back pieces.

The nob will be next as well as more members of the squad.  I’ve enjoyed working on them so far though I must confess I’m not really looking all that forward to building my third trukk.