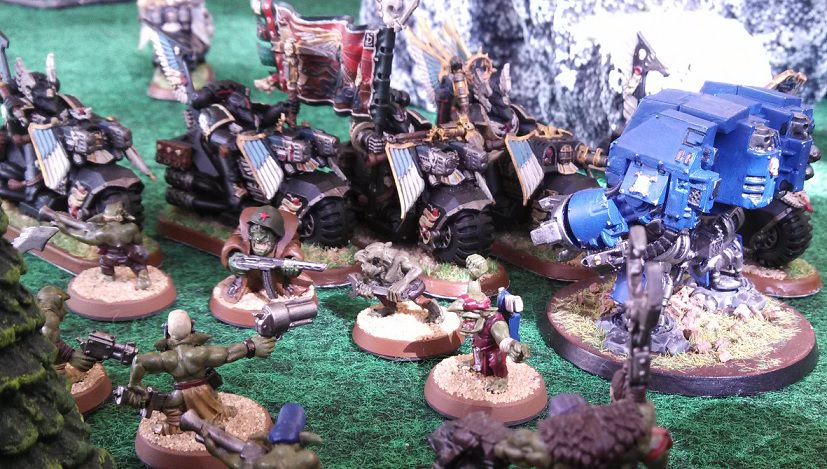 TURN ONE: Dark Angel bikers backed by their darkshroud landspeeder skirted a high plateau and roared up to within striking range of the chaos defenses.  The True Ultramarines blinked and suddenly there was a blob of darkness from which a flock of hungry engines boomed and whined.  A black and gold armored giant rode out from the cloud.   His death’s head helmet marked him as a priest.

“Purge the alien!  Burn the unclean!  Death to Chaos!” Chaplain Titus Exhaltus screamed through his vox caster.  He swept a wicked mace, which laughed with blue lightning, at the defenders in his van.   Scouts popped up from hidden positions on a north-west  hill.  They bounced sniper fire off the helbrute’s head and left arm to no effect.

A lone rhino moved out laterally in the marine back field.  One ork trukk matched the rhino’s maneuvers, angling to get close enough for the boyz to pile out and charge without getting shot up.

The other trukk rolled toward the main action.  The driver, watching the battle develop rather than where he was going plowed into the remains of a bastion wall and tore the front end off his pick-up.  The engine block was lodged in a second story window frame.

The boyz piled out and began kibitzing about how to fix their ride.  A few gretchin wandered over, interested as the discussion quickly came to blows.

Meanwhile, True Ultramarines opened up on the bikers, as did ork mortars.  The big guns were mostly out of sight behind the hill and their spotters on top of the bluff were too short to see over the aegis line.  So they were reduced to hand signals and shouting back and forth at the big mek, who had problems of his own trying to figure out how many gretchin he could use as “living ammunition” while still maintaining acceptable artillery crew efficiency, and simultaneously trying to hack into the Dark Angels communications grid with his laptop as well as eat his live squig sandwich lunch.

They managed to kill one biker in a massive if unfocused maelstrom of bolter, anti-tank missile,  grots-fired-through-warp, and lobba fire.

The helbrute stepped gingerly over the defense wall.  The chaos lord had given a long speech an hour before about what would happen to anyone who knocked over his aegis “like last time”.  It fired a random melta shot past Chaplain Exhaltus into the approaching darkness.

“Follow me or die you little pissants!” the walker screamed at a knot of gretchin trying their level best not to be noticed.  They reluctantly obeyed.  It’s a grot’s life.

Meanwhile, the havoc champion swung the quad gun around, swatting aside a snotling trying to climb it, and blew up the Darkshroud speeder with a lucky hit.  The helbrute charged the now revealed bikers.  Terrified yet inspired so did the gretchin.

A couple of plasma shots sizzled past the walker.  Alternating death metal music and canned, heretical yet pro-imperial diatribes from a True Ultramarines rhino’s sound system jammed the bikers’ communications, confusing their defensive fire.  Titus ran over the runt herder.  He was little more than a speed bump and his loyal cohorts accounted for five more greenskins.  The helbrute punched one rider off his motorcycle.  The marine exploded like a rotten watermelon.  His now riderless bike careened into another dark angel then exploded in a hot white ball of plasma.

Switching frequencies, the Dark Angels regained control of their communications and executed a brilliant “angelic wings” maneuver where they retreated from the helbrute in two synchronized circles and ended up behind him.

A gretchin yelled, “Leeeeg It!” and the little guys ran off never to be seen again.